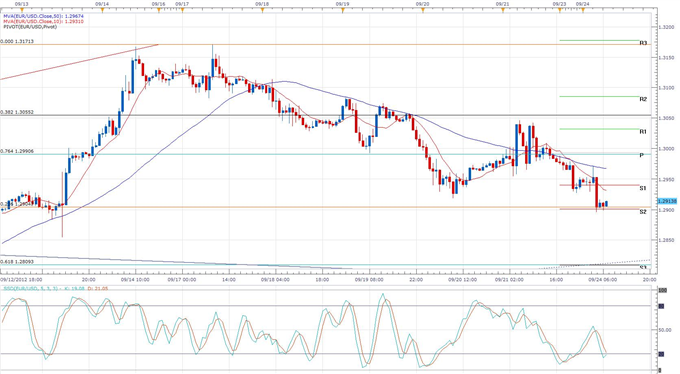 In the near-term, Euro session trading will remain focused on three central topics- Greek budget cuts required by the Troika, the establishment of the joint banking supervisor, and whether or not Italy and Spain will ask the ECB for aid. As updates and comments are released on any of these three topics, the markets will respond according to the importance of the update.

Today’s session has thus far been no different, as the extent of Greece’s budget cut proposal was argued by news reports and officials. The German Der Spiegel Magazine reported that the Greek government needs 20 billion Euros of budget cuts to fulfill its Troika requirement, not 11.5 billion as was reported last week. One German government spokesman declined to comment on the story, and just said that the numbers are not yet known. Meanwhile, German Finance Ministry Spokesman Kotthaus said that the finance gap may be wider than previously assumed.

Regarding the permanent ESM bailout fund, the EU confirmed today that they are discussing ways to leverage the 500 billion Euro fund. Germany’s Kotthaus said that he couldn’t put a headline number on the leverage amount, and private funding could be included to top the rescue fund.

Turning to the possible aid that could be sent to Spain and Italy, Merkel ally and finance spokesman for the CDU Michael Meister said that Germany is losing patience with Spain’s indecision on the matter. Meister called on Spanish PM Rajoy to spell out what the situation is and even said that Rajoy has a communication problem. Meister also said that Germany is open to a full Spanish aid program. In Italy, PM Monti says 2013 will see a return to growth in the country’s economy.

The only piece of news that significantly moved the Euro during the session so far was a lower than expected IFO business climate number. The survey result dropped from August to September, which disappointed analysts expecting to see a more upbeat result.

The Euro declined nearly 50 points against the US Dollar following the German business climate result, testing the key 1.2900 level. Support could be provided at the key level, which is also the 23.6% retracement of the August rally. 1.3000 could provide resistance for the pair.

In the North American session, the Dallas and Chicago activity indexes are the only significant pieces of data scheduled to be released.