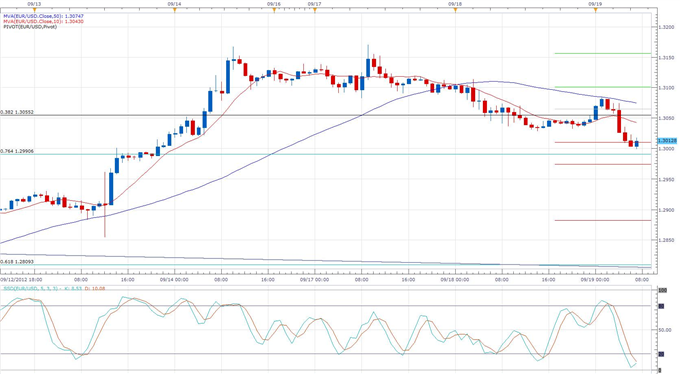 Today’s trading has continued to reverse last week’s 600 point Euro rally that brought the single currency up to nearly 1.3200 against the US Dollar. EURUSD has so far dropped back to nearly 1.3000 in today’s trading, the key figure that was broken last week and could now provide support.

Furthermore, the Euro first dropped following a Reuters report that German coalition members had proposed that only cross-border banks and systematically-relevant banks should be included in the EU’s banking supervision plan. Just earlier this week, Merkel said that the ECB should not be rushed to meet Europe’s January 2013 deadline for the supervision plan. On the other side, French PM Jean-Marc Ayrault said France wants to move quickly on instating the EU banking supervision.

In other ECB news, we did not hear much today about either Italy or Spain asking the ECB to enact its OMT plan and begin purchasing either country’s bonds. Deputy Prime Minister Soraya Saenz de Santamaria said Spain will decide whether to ask for ECB bond purchases once all the details have been analyzed.

Meanwhile, PM Rajoy said that Spain must cut its own deficit in order to finance itself. Regarding the recent calls for an independent Catalonia, Rajoy said that rules on distributing tax revenues to the regions could be improved. Finnish PM Jykri Katainen added that the Spanish government’s measures to balance its budget and improve competitiveness should be getting more attention from the financial markets.

In England, we found out that the BoE’s decision to keep the asset purchase target and the interest rate unchanged was unanimous among MPC members. Also, ECB President Mario Draghi said today that he is open to publishing minutes from the bank’s meetings, like the BoE or Fed. A majority vote by the ECB board members could change the policy of secret protocols.

Finally, German 2-year notes were sold for a positive yield in an auction today for the first time since June.

In the North American session, US housing starts for August will be released at 12:30 GMT.