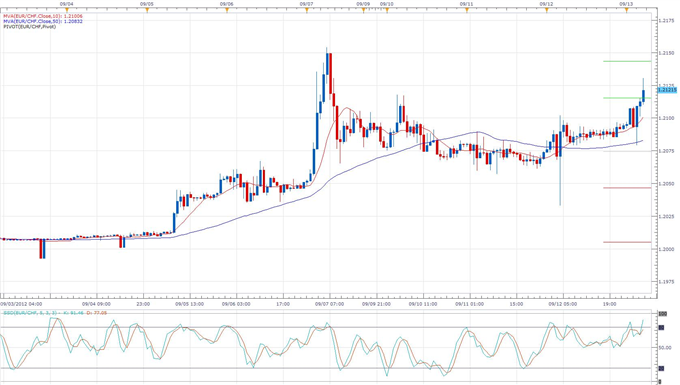 Just when things were looking more stable for Spain, as pressure was mounting on the country to ask the ECB to buy its sovereign bonds as part of the OMT, Catalonia reminded traders of Spain's regional issues. Catalan Regional President Artur Mas said Catalonia will ask Spain for fiscal sovereignty, as he said the call for independence is coming from the streets. He further stressed the point by saying that Spain and Catalonia are tired of each other.

Mas said that if Catalonia was given independence they would continue to make payments to Spain, but it wants more time to cut its deficit. Furthermore, Mas said that Northern Europe is tired of Southern Europe and most European would throw Spain out of the EU if they could.

Also in the European session, the ECB released its monthly bulletin which echoed Draghi’s statements on September 6. The bulletin said that economic growth will remain weak and that OMT would address fears about the Euro survival. Further, the bulletin said that the inflation outlook is balanced.

However, ECB member and Cyprus central bank governor Panicos Demetriades said the bank might not have to purchase government bonds, because the threat alone of the ECB’s OMT might be enough to keep away investors looking to drive up borrowing costs.

Earlier in the session, the SNB decided to keep the Libor target rate and the EURCHF trading floor unchanged. However, the bank’s lower forecast of inflation and growth sent the Swiss Franc lower. EURCHF climbed above 1.2100, which was a 6-month high before it was broken last week, and now 1.250 has provided strong resistance since the beginning of the year.

In other economic news, the Greek unemployment rate for 2Q was reported at 23.6%. In Italy, annual inflation (EU harmonized) for August was revised lower to 3.3% according to a final CPI estimate.

In the North American session, many analysts are expecting an increase in volatility following the FOMC rate decision and Bernanke’s ensuing press conference. Check out the DailyFX guide to trading the FOMC decision here.