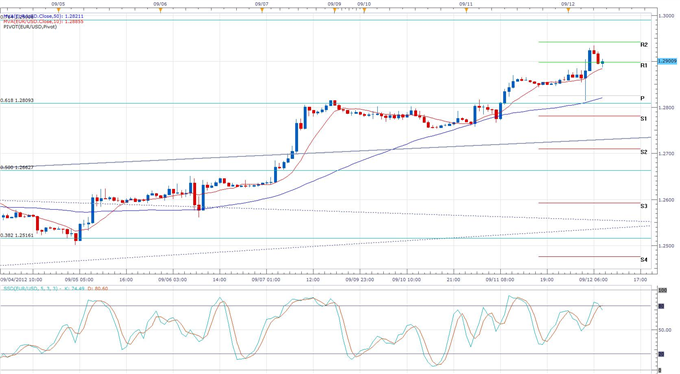 ESM Governing Board Will Meet as Soon as October 8

Today, European officials completed a hat trick made up of announcements confirming market excitement over decisions and plans that would tentatively fix the Euro. It started last week when ECB President Draghi announced the bond purchasing plan, and today the EU announced its intention to make a single supervisor of all Euro-zone banks, and only shortly after the German Federal Constitutional Court announced its decision to allow the ECB with conditionality.

The European Commission President Barroso said the banking supervisor would be a first step towards a banking union, and also called for all of the European Union to join under a federation of nations. Additionally, the German high court said that Germany can have no more than a 190 billion Euro share of the 500 billion Euro ESM bailout fund.

Luxembourg Prime Minister Jean-Claude Juncker said the ESM will hold its first meeting of governing board members on October 8. Each country will most likely send its finance minister as its representative. The concrete announcement about the ESM’s first meeting sent EURUSD above 1.2900 where the pair set a new 4-month high.

A lot of support from various German officials followed the court’s announcement. German Chancellor Merkel said the court ruling is part of a strong German signal to Europe and it is a good day for Germany and Europe. She also welcomed the bank supervisor plan, but she still rejects joint debt liability in the Euro-zone. German Finance Minister Schaeuble said the ESM can be operational within a few weeks, seemingly agreeing with Juncker. While welcoming the EU proposal about a banking supervisor, Schauble said that the ECB can’t supervise 6,000 banks anytime soon.

Referring back to last week’s ECB decision, Finland central bank head and ECB member Erkki Liikanen said the vote to keep the interest rate the same was unanimous. Furthermore, Spanish PM Rajoy said he will wait to see how Spain’s bond yields do in the coming days’ sales before deciding on asking the central bank for help, Rajoy said that Spain will make the bailout decision based on its own interests.

In the UK, jobless claims unexpectedly fell by 15,000 in August. The unexpected employment improvement drove GBPUSD above 1.6000. BoE member Broadbent said the central bank should focus more on unemployment and said he would vote for more QE if it’s needed.

EURUSD has continued to stay slightly above 1.2900 and the next resistance might be found by the 1.3000 key figure, which is also near the 76.4% retracement of the May-July decline.

In the North American session, equity market talk will likely focus on the unveiling of the new Apple iPhone, as part of what has come to be known as ‘Apple Day’, but the event is not likely to affect currency trading.