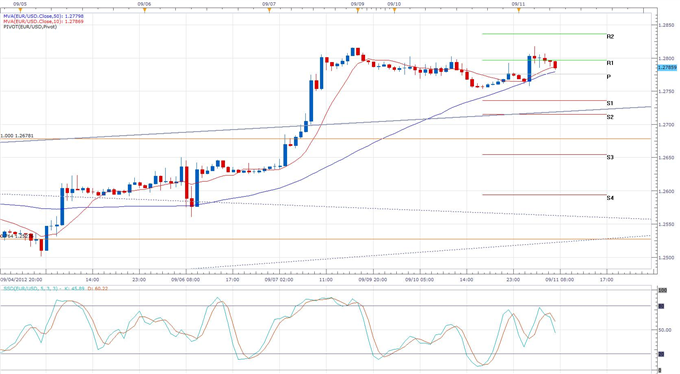 The leading piece of news in today’s European session is that the German Federal Constitutional Court decided to reject German Lawmaker Peter Gauweiler’s bid to delay their ruling on the ratification of the ESM permanent bailout fund. On Wednesday at 08:00 AM GMT, the high court will announce its decision about the 500 billion Euro bailout fund.

Traders took the news as a good sign for the single currency, and the Euro rallied against the US Dollar, rising from above 1.2750 past 1.2800. The pair slowly dipped back below the 1.2800 level, which could now provide resistance. Support could be provided by a former 2.5 month high, by 1.2747.

Regarding other tools to help fix the Euro crisis, German officials were less optimistic. German Finance Minister Schaeuble said Germany is against debt unions or Euro bonds; he added that shared liability or a printing press won’t solve woes. Schaeuble predicted that Germany will meet the 0.7% growth forecast for 2012, and is unlikely to beat the 1.6% forecast for 2013. He added that the Greece program conditions can’t be renegotiated, but complimented Italy and Spain for being on the right path.

The Finnish PM Jykri Katainen joined Schauble’s call and also said that Finland doesn’t believe in Euro bonds. The PM added that there is no party in the Finnish parliament that wants to leave the Euro, and agreed that a solution to the crisis is needed.

The heads of the three Greek party coalition are meeting today to draft a new austerity plan following the rejection of PM Samaras’s draft for 11.5 billion Euro budget cuts. According to the Greek news site Ekathimerini, only 6 billion of the 11.5 billion in Samaras’s proposal would have been accepted by the Troika.

In economic releases, the UK trade deficit was at the lowest level of 2012, as exports were up 9.3%. This news sent the British Pound higher against the US Dollar, and GBPUSD is now trading well above the key 1.6000 level. The BoE’s Mccafferty said consumer spending is the main risk to the UK outlook.

In the North American session, the US trade balance for July will be reported at 12:30 GMT.