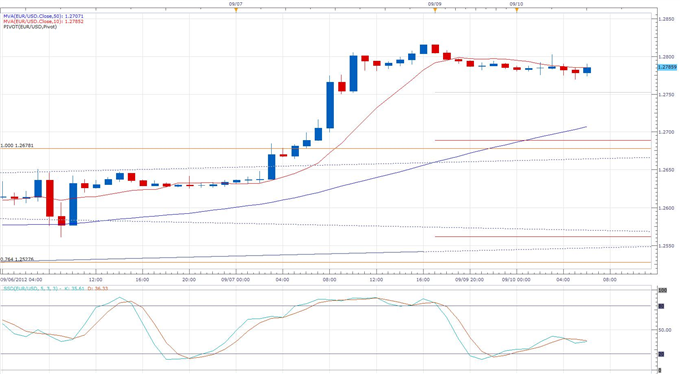 German ESM Ruling Could Be Delayed by 11th Hour Bid

The German High Court ruling that would potentially allow for the ratification of the ESM permanent bailout fund, that was supposed to be announced on Wednesday, could possibly be delayed by a last minute bid by lawmaker Peter Gauweiler. Gauweiler asked judges to block the ratification on grounds that the ECB’s pledge to buy sovereign bonds at an unlimited amount has changed the situation.

A court spokesman said the court is deliberating on Gauweiler’s bid today and will announce tomorrow if it will proceed with the ruling as scheduled. Any signs of a delayed ruling or of the court leaning towards denying the ratification of the fund would be negative for the Euro. However, a Finance Ministry spokesman said today that he is confident the court will approve the ESM.

Meanwhile, as this sentence is being written, Greek PM Samaras is meeting with Troika delegates. A German government spokesman said the Troika report on Greece could take a while. Samaras’s coalition partners recently rejected a plan for 11.5 billion Euros of spending cuts, but Greece must come up with an austerity plan that the Troika finds acceptable in order to receive the next 31 billion Euro bailout payment.

Furthermore, the ECB bond purchase plan will not go into effect until Spain or Italy formally requests that the central bank buys their debt. However, Spanish Industry Minister Jose Manuel Soria said today that Spain won’t make the request from the ECB until they know the exact terms of the purchase program. So the plan seems like it won’t go into affect just yet.

In economic news, the final estimate of the 2Q Italian GDP was slightly lower than initially estimated, which led to a 14 basis point spike in 10-year bond yields.

The Euro has slowly declined from the week’s open; EURUSD fell below the key 1.2800 level over the course of the session. A 3.5-month high at 1.2833 could provide resistance and the previous 2.5-month high at 1.2750 could now provide support.

Coming up during the North American session, US consumer credit for July will be released at 19:00 GMT, $9.550B expected.