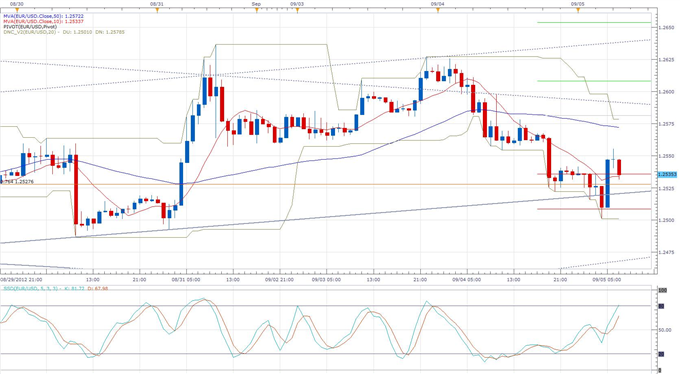 Markets Heat Up On German Optimism and Weaker Euro PMI's

Signs of a return to volatility appeared in the currency markets during the European session, as the Euro dropped over 60 points against the US Dollar since last night’s open and then quickly reversed those losses later in the day, without a clear driving force to the sporadic trading.

Earlier in the session, EURUSD dropped over 30 points following a downward revision of the Euro-zone PMI’s for services in August. The composite output for the Euro-area has been negative for the past seven months. Following the PMI release, EURUSD found support right above the key 1.2500 level, which has provided support over the past few weeks. The pair also broke through a month and a half downward trend line.

However, shortly after, the Euro found some support and rallied over 50 points. The only positive story that was released around that time was about German Finance Minister Schaeuble’s comments; he said that the Euro will be a bit more stable next year; Schaeuble also said he doesn’t expect the troubles to be over. Most important, Schaeuble said he expects the Euro-zone to be in the same form, imlplying that he thinks Greece will still be in the fold next year.

Earlier in the day, a German sale of 10-year bonds failed to reach the maximum target of 5 billion Euros, and instead sold of for 3.61 billion Euro. The bonds were sold for a 1.42% yield. A spokesman for the German Federal Finance Agency said the disappointing sales were due to hesitance before tomorrow’s possible ECB rate cut, and don’t represent a permanent turning point.

Also today, EU President Van Rompuy said some countries’ bond yields are higher than economically justifiable, while other countries’ yields have become too low because they are looked at as refuge. He said the current situation is not sustainable, but did not directly reference the possible ECB bond purchase plan.

The other data released during the session was the Swiss interest rate, which was reported at -0.5%. Swiss Economy Minister Johann Schneider-Ammann said Franc strengthening pressures have eased. However, the minister also said the second half of 2012 could be tougher for the Swiss economy.

Later today, the Bank of Canada will decide the interest rate for September, the median expectation among Bloomberg surveyed economists is for the rate to be held at 1.00%.