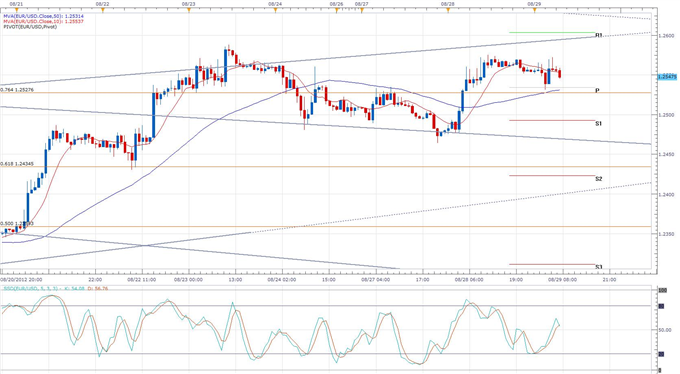 The leading story in today’s European session is that the European Union is looking to form a banking union by early 2013 to supervise banks. The EU said the European Central Bank will play a central role in the new bank supervision plan, but national governments would also play a role. The point of the banking union is to try to prevent further banking crises, like the one that is currently pressuring Spain to request another bailout for the struggling Bankia.

Meanwhile, in the Euro-zone, ECB President Mario Draghi responded to criticisms of his bond purchasing plan in the German newspaper Die Zeit. Draghi wrote that the ECB will always act within the limits of its mandate, but sometimes the central bank is required to go beyond standard monetary policy. Furthermore, Draghi reminded Germany of its importance to the Euro, saying the single currency’s biggest economy needs to remain an anchor of a strong Euro. Just this morning, lawmakers with the German CDU and FDP parties said that the ECB’s plan could make the bank a systematic risk to the financial system.

Turning to Greece, the Greek Finance Minister Yannis Stournaras said that the prime minister has secured backing for a two-year and 11.5 billion euro budget cut. The budget cut will be presented to the Troika next week, which Greece hopes will be deemed satisfactory the next bailout package.

However, none of these macro developments had a significant effect on Euro trading. As of 11:00 GMT, EURUSD was only trading a few points lower than the session open. It’s unclear what sent EURUSD below 1.2550 earlier in the session, but the decline was soon reversed. Last week, the pair hit resistance provided by a month-long upward trading channel near 1.2600, and the next support could be provided by the key 1.2500 figure or around 1.2470 by a downward trend line from May 21.

Furthermore, the French business confidence indicator and the Italian consumer confidence indicator for August were both reported as expected. The KOF Swiss leading indicator signaled that the economy will grow at a greater rate for the seventh straight month. The German CPI and annual inflation rate will be released at 12:00 GMT. A higher inflation would mean an interest rate cut is less likely in the next ECB meeting.

The markets are pretty focused on Bernanke’s speech at the Jackson Hole Economic Policy Symposium which is set to take place on Friday. A dovish tone or talk of QE3 could drive the USD lower and risk-correlated currencies like EUR higher.