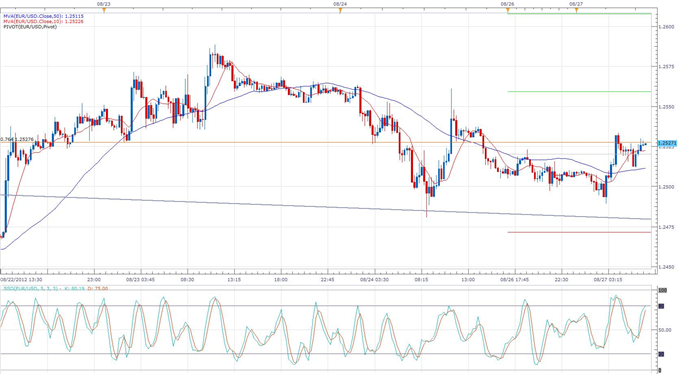 Monday’s European session provided the markets with a lot of talk regarding the European debt crisis, but no actual answers to the major issues. Regarding Greece, German Chancellor Angela Merkel’s comments, that a decision on the Greek bailout terms will not be made until the Troika report is released, still held up, but rumors surfaced today that the report won’t be released until October. A German spokesman said he had no knowledge of such rumors, but he didn’t deny them either.

Meanwhile, Merkel has been struggling to keep all her ducks in a row. Following the Bavarian Christian Social Union party leader’s prediction that Greece will leave the Euro-zone in 2013, Merkel said in an interview with Der Spiegel that officials in her coalition should carefully weigh their words. She then went on to reiterate her support of Greece staying in the Euro.

Also, the German and French Finance Ministers met in Berlin today. Germany’s Schaeuble said after the meeting that the two countries are working on structural solutions in the areas of a banking union and fiscal Europe. The Bundesbank’s Weidmann repeated his opposition to mass ECB sovereign debt purchases yesterday by saying that such purchases are ‘addictive like a drug.’

Therefore, we don’t really know anything new about the possible measures to solve the Euro-zone or Germany’s official attitude towards those measures. That’s why the Euro has not significantly moved since today’s open and continues to trade around 1.2500 against the US Dollar. Resistance could be provided at 1.2528, by the 76.4% retracement of July’s decline, possible support by the key 1.2500 line.

The UK market was quiet today because of a banking holiday and there were two economic releases out of the Euro-zone. The German IFO business climate survey reached a new 2.5-year low in August, based on worsening expectations for the future. The German import price index was up 0.7% in July, slightly less than expected. Neither release had significant impact on the Euro.

Regarding the US economy, Federal Reserve Bank of Chicago President Charles Evans voiced support for a third round of quantitative easing while he was speaking in Hong Kong. Evans urged for open-ended bond purchases and said Fed policy should be tied to unemployment and inflation. Evans was already known as dovish and his comments did not surprise the markets. Therefore,the Euro only reversed a small decline following his comments and stayed within the range mentioned above.