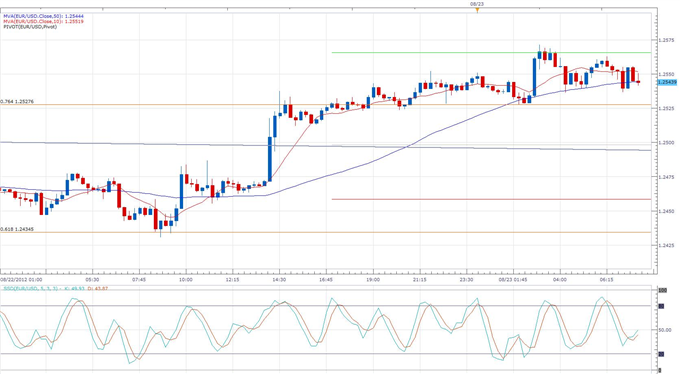 Samaras Pleads Greece's Case and Says 'Grexit' Would be a Disaster

Greece was the subject of chatter again today, as Prime Minister Antonis Samaras again pleaded his country’s case to the media between meetings with European leaders. Samaras told the French newspaper Le Monde that Greece aims to meet commitments and speculation on a Greek exit must end. However, he told the newspaper that Greece needs a little breathing room, and the government is finalizing 11 billion Euros of budget cuts. He finally said that an exit from the Euro would be a disaster.

Tomorrow, Samaras will be meeting with Merkel. German Finance Minister Wolfgang Schaeuble said today that there has to be understanding for the fact that Greece lost time due to multiple elections, but additional time would not be a solution. Yesterday, Luxembourg PM Juncker said there will be no decision on Greek aid before October, after the Troika report will be released. The markets seem to be viewing any developments that would afford Greece more time to meet budget cuts and repay its lenders as risk positive, as they further the chance of the country defaulting or leaving the Euro.

There were no further official comments about the ECB considerations for a plan to cap Spanish and Italian bond yields. However, Germany’s Die Welt reported that the central bank may set secret ceilings to the soaring bond yields, as publicizing the yield caps wouldn’t quiet the markets.

In the UK, the Bank of England defended its quantitative easing program by saying that it has economic benefits and limits the depth of the slump. The comments follow a government claim that loose monetary policy is bad for ‘savers’. The comments may also be a preemptive defense for future QE, as the BoE’s Weale said that the central bank is talking about further easing. Any further QE would be negative for the British Pound, but overall risk positive.

There was a lot of positive economic data in today’s session, following three quiet days during the first half of the week. German GDP growth was confirmed at 0.3% in Q2 as was initially estimated in last week’s release. There were both misses and hits across the different Euro-zone PMI’s for August, but the composite PMI for the entire region beat expectations, but still signaled declining output for the 7th straight month. Finally, the BBA loans for house purchases slightly beat expectations.

None of the economic releases had a serious effect on the markets, which were trading according to the economic chatter concerning the Euro crisis and the possibility of further QE in the US. The Fed’s Bullard said in the middle of the day that the FOMC minutes, which caused a rally yesterday in risk correlated assets, were ‘stale’ and data has improved since the release. The minutes indicated that the committee members are considering another round of quantitative easing.