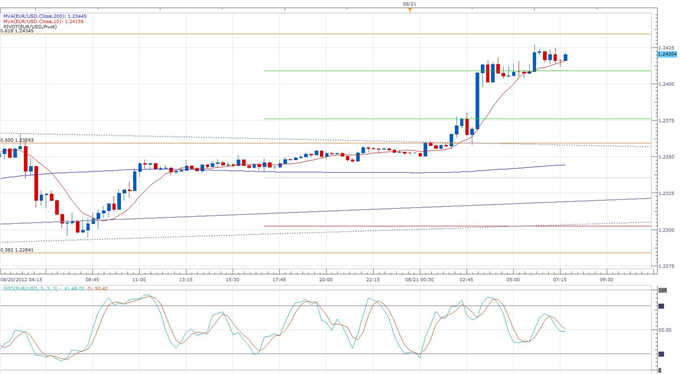 Euro Rises on Speculation that ECB Might Ignore Bundesbank Objections

Despite the Bundesbank’s opposition to an ECB bond purchasing program, such a plan seemed more likely today, as commentators said that we should consider ignoring Bundesbank objections because the ECB might act anyways. The Telegraph’s International Editor Ambrose Evans-Pritchard wrote this morning that the newspaper confirmed a Spiegel report that the ECB is considering a plan to cap Spanish and Italian bond yields. Fitch’s David Riley also said that the central bank may act without the Bundesbank’s approval.

The other major issue driving the Euro crisis, Greece’s need for additional bailout payments, also seemed to be slightly improved in today’s trading. Greece’s Samaras will meet with Luxembourg’s Juncker today to start a week of talks that will also include discussions with Merkel and Hollande. Today, Germany’s CDU’s Norbert Barthle, a Merkel ally, said that small concessions are possible for Greece as long as they show a willingness to meet the main budget targets.

The risk appetite caused by these two developments sent the Euro 125 points higher against the US Dollar, up to a new 2-week high at 1.2425. The rally pushed the Euro out of a 2-week triangle and resistance might next be found at 1.2435, by the 61.8% retracement from July’s decline.

Finnish PM Katainen also weighed in on the crisis fighting measures by saying that Finland will work to improve Euro stability, and the currency remains useful for Finland. It was also reported today that Finland’s unemployment rate fell to 6.9% in July, from June’s 7.9% rate.

In other economic news, the UK reported a 1.2 billion Pound budget surplus for July, but still borrowed 0.6 billion Pounds during the month despite expectations for the government to repay some loans. Spanish borrowing costs fell in today’s sale of 12-month and 18-month bills; the country sold 4.51 billion Euros of debt versus a 4.5 billion target.

At 16:00 GMT, the meeting begins between Samaras and Juncker.