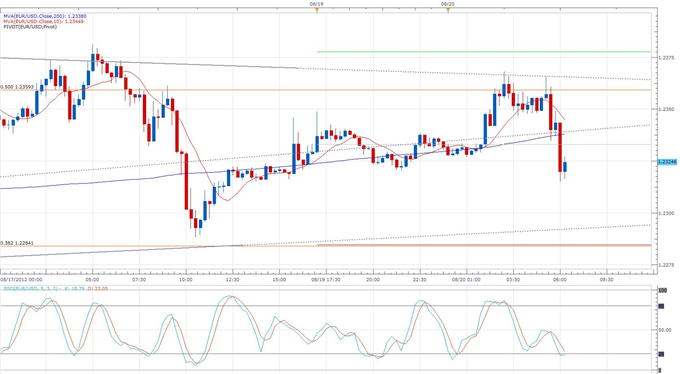 A morning of slow gains for the Euro against the US Dollar were erased when the Bundesbank said in its monthly bulletin that it sees significant risk in the ECB bond buying plan. The bank further said that the risk sharing decisions should be the governments’ and the central bank shouldn’t take more risk onto its balance sheet.

Following the bulletin release, the Euro dropped back down towards 1.2300, away from the resistance at 1.2366, by a two week downward trend line. EURUSD could be seen trading in a triangle since early August, with the two trend lines set to cross on August 24. Support could be provided by the upward trend line around 1.2300.

Over the weekend, the German Spiegel magazine provided us with another clue about the possible ECB bond purchasing program. The magazine quoted an unnamed ECB source as saying that the central bank is considering a plan to not allow any one country’s debt yield rates to rise above a certain premium over German bonds. The plan will be discussed at the ECB’s September meeting according to Spiegel’s source, and the ECB has not responded to this leak.

Last week, German Chancellor Angela Merkel said she supports ECB crisis-fighting strategy, without specifically mentioning what that strategy is. It’s therefore possible that the German leader is on board for the bond purchases, and market excitement will likely build ahead of the September meeting.

However, will Greece be included in such a plan? Greek 10-year bonds currently provide a yield of 23.51%, quite a bit higher than Germany’s 1.57% 10-year yields. Greek PM Samaras will be meeting with Luxembourg’s Juncker, Merkel, and France’s Hollande this week, he will likely request a 2-year extension on budget cuts imposed by Greece’s international lender. German Conservative Parliamentary Leader and Merkel Ally Volker Kauder said that Greece shouldn’t be given an extension and be forced to stand by original agreements. German government spokesman Seibert said that a big decision on Greece shouldn’t be expected this week.

Meanwhile, ECB member Joerg Asmussen told Frankfurter Rundschau that the Bundesbank isn’t isolated because of its opposition to the ECB plan mentioned above, despite a seeming rift between the bank and Merkel on this issue. Asmussen added that a Greek exit from the Euro is manageable, although undesirable.

There were very few economic releases during today’s European session. Late Sunday night, Rightmove reported that UK house prices fell 2.4% in August, but are still up 2.0% over the year. Euro-zone construction output was down 0.5% in June, and down 2.8% from June 2011. Neither release had a significant effect on the markets.