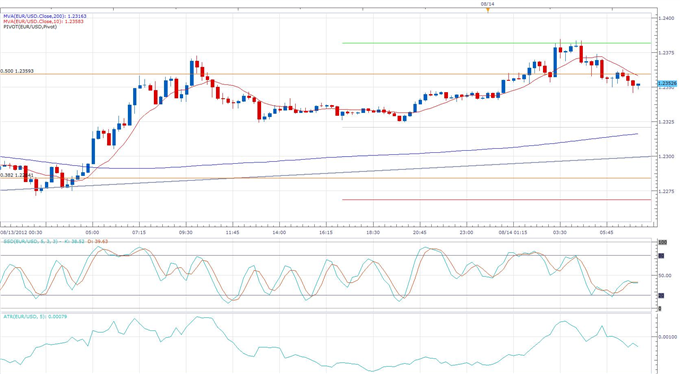 Despite a European session that included major releases like Euro-zone GDP, UK inflation and German economic sentiment, volatility remained extremely low in currency trading. EURUSD is only up about twenty points at the time of the release.

The French GDP for 2Q kicked off the session’s data releases by remaining unchanged over the quarter. Apparently no news was good news, as the release beat expectations for a 0.1% drop off and the currency continued trading above 1.2350. French Finance Minister Pierre Moscovici said the perspective for growth in the third and fourth quarter is better than the first half of the year. The government is expecting a 0.3% growth in GDP for the year.

The Euro continued to rise as the German economy was reported to have expanded more than expected, the GDP was up 0.3% over the quarter. UK annual inflation unexpectedly rose to 2.6%, giving GBPUSD a temporary boost past 1.5710 resistance.

Finally, the decline of Euro-zone GDP in 2Q had a small splash in the markets, as the 0.2% quarter over quarter decline was as expected. However, the ZEW survey for economic sentiment showed that the experts’ outlook for Germany worsened, and the report said export related sectors could be affected.

The Euro continued to decline back under 1.2350 following the ZEW report, keeping only a small part of the day’s gains. Despite a longer term down trend, the Euro continued a 3-week uptrend against the US Dollar in today’s session. There could be possible resistance at 1.2435, by the 61.8% retracement of July’s declines. The upward trend line could possibly provide support around 1.2300.

Traders should look towards the US retail sales, set to be released at 12:30 GMT, as the next possible market mover.