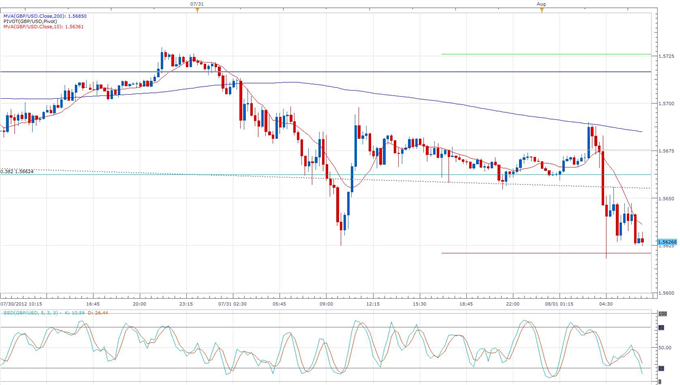 It’s the same story but a different day in Europe, as hopes for strong European Central Bank action in their meeting tomorrow were dimmed by cautious speak from German officials. Bundesbank President Weidmann warned that the ECB must not overstep its mandate and said that governments shouldn’t overestimate ECB possibilities. The Bundesbank already stated that it opposes large scale buying of bonds, and Weidmann’s comments today further lowered the possibility of the ECB approving purchases of Italian and Spanish debt in tomorrow’s meeting.

Another possible bullish development in tomorrow’s ECB was also rebuffed by a German official, when Economy Minister Phillip Roesler said that Merkel and the cabinet ministers oppose granting a banking license to the permanent ESM rescue fund.

However, the one piece of positive chatter came from PM Monti, who said that Italy will not ask for a bailout, but rather might ask the ECB or EFSF for help buying its debt to keep bond yields at a low enough level. Also, the UK’s 80 billion Pound Funding for Lending Scheme opened today, the program is intended to stimulate the UK’s struggling economy.

Furthermore, the European session’s economic data was of no help for investors looking for signs of a recovery. The UK manufacturing PMI for July sent the biggest shock into the currency market, dropping 3 points below expectations at 45.4, and falling to the lowest index level in over 3 years. Euro-zone and German manufacturing PMI’s were revised lower from initial estimates, also setting new 3-year lows. UK nationwide house prices also fell more than expected in July.

The UK PMI was the only index to have a noticeable effect on the markets, sending the British Pound about 55 points lower against the US Dollar. The pair is currently trading below 1.5650; 1.5475 has provided support for a month-long range and 1.5750 has provided resistance.

Central bank decisions are likely to be the driving theme for the next 24 hours of trading. The FOMC will meet this afternoon and set the rate for August as well as weigh the possibility of further quantitative easing. The ECB will set monthly interest rates tomorrow, as well as discuss the topics weighed above, and the BoE will set the interest rate and asset purchase target. Although analysts expect the interests rates to remain unchanged in all 3 economies, Morgan Stanley announced today that they expect the Bank of England to cut interest rates by the end of the year and project the BoE will add 100 billion Pounds to their quantitative easing target by March of next year.