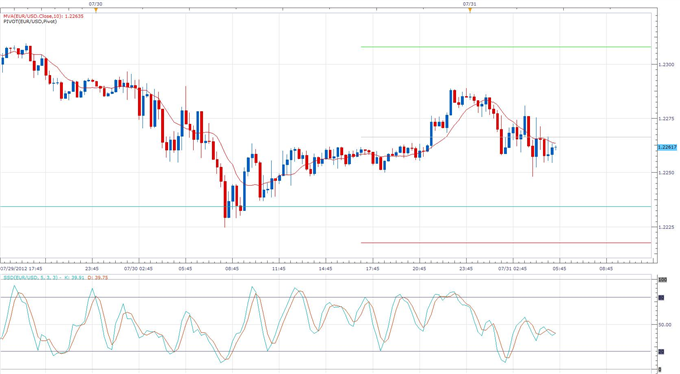 Today’s European session has had little chatter but a lot of negative economic indicators. EURUSD has swung above and below 1.2300 since the initial rally following European Central Bank President Draghi’s pro-Euro comments on Thursday. Following those comments, there have been talks of a plan for the ECB and EFSF to buy Spanish and Italian debt in primary and secondary markets, in an attempt to lower borrowing costs for both struggling economies. However, this plan has yet to be officially confirmed, likely hinging on German approval of the bond buying program.

Meanwhile, Euro-zone unemployment reached an all time high at 11.2% and inflation remained lower, both are likely results of the debt crisis’ pressure on the European economy. German retail sales also disappointed investors by coming in lower for a third straight month, and German unemployment rose as expected.

The Euro has floated up and down in today’s session, currently only trading slightly higher against the US Dollar. Support could be provided by 1.2234, the 50% expansion from May’s high to June’s low, while resistance might be found at the psychological 1.2300 line.

The European Central Bank will meet on Thursday to decide the interest rate for August, and the bank is more likely to take action after today’s data. The 0.25% rate cut in July was not seen by currency investors as significant enough to boost the Euro, and the single currency sold off against the US dollar following last month’s rate decision.