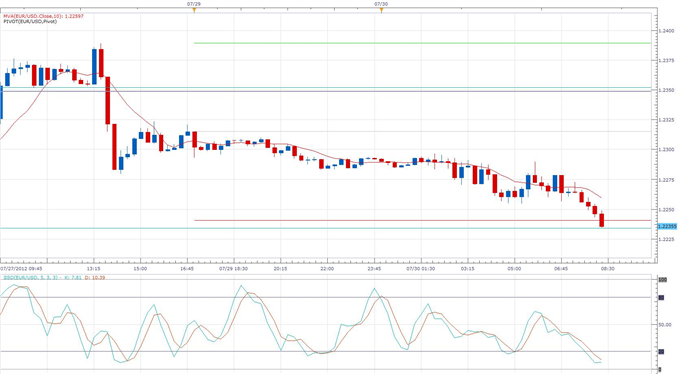 Last week’s excitement over ECB’s Draghi’s comments was scaled back today as chatter out of Germany and negative European data reminded investors that the Euro debt crisis is far from over. German spokesman Georg Streiter reiterated that Germany wants Greece to remain in the Euro-zone but is still disinterested in jointly-issued Eurobonds.

Beyond debt issuing, Free Democratic Party’s Hahn attacked ECB debt buying by saying that Germany should consider suing the central bank over bond purchases; a government spokesman later said there is no need for a lawsuit. German opposition leader Steinmeier even blamed Chancellor Angela Merkel for signaling to Draghi to come up with the bond purchasing plan that may involve purchases by both the ECB and the temporary bailout fund EFSF.

In economic news, Spain’s economy continued to contract in Q2, down 0.4% according to preliminary estimates. Q1 saw a 0.3% decline in gross domestic product. According to S&P, the Euro-zone on the whole will continue to see declines, they cut their forecast to a 0.6% decline in 2012 from a previously predicted unchanged GDP. However, S&P does see a 0.4% growth in the Euro-zone economy in 2013.

Furthermore, the Euro-zone consumer confidence was confirmed at the lowest in nearly 3-years according to a European Commission survey.

The next chapter in the Euro-zone debt crisis story is likely to unfold on Thursday, when the ECB will announce August’s interest rate. Economists are expecting the central bank to keep rates at 0.75% following last month’s rate cut.

Following today’s news, the EURUSD slowly fell below the key 1.2300 line over the course of the European session. Support could now be provided by 1.2235, the 50% expansion from May’s low to June’s high.