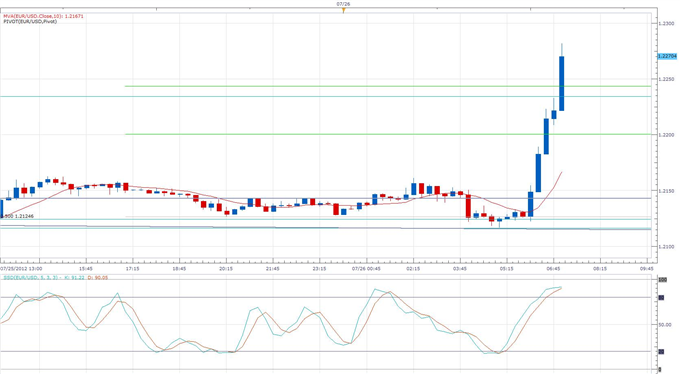 Draghi Says ECB Will Do Whatever It Takes to Preserve Euro

European Central Bank President Mario Draghi injected the markets with a shot of risk appetite on Thursday afternoon, when he said that the ECB will do whatever is takes to preserve the Euro. However, Draghi did not specifically mention monetary easing nor providing funding for the ESM permanent bailout fund, as some think is necessary to bring the Euro-zone out of its debt crisis. Draghi also said that the Euro is much stronger than people acknowledge and said the bank doesn’t want to make up for government actions.

Euro led the rally of risk correlated currencies against the US Dollar following Draghi’s comments, rising nearly 160 points and climbing above 1.2260. The psychological 1.2300 line could provide resistance.

Before the market was sparked by Draghi’s comments, the biggest market moving news of the European session was an ECB release reporting that Greek private-sector bank deposits fell more than 4% in June. Greek private deposits are at the lowest level since October of 2005, and Spanish, Portuguese and Irish private banks also saw drop-offs in private deposits. The decline in private deposits shows worsening trust in Euro-zone banks and in the strength of the Euro as related to some of the struggling countries.

In other European news, German consumer confidence was reported as higher than expected. However, the news did not significantly affect Euro trading. During the North American Session, the Kansas City Fed Manufacturing Activity will be released as well as initial job claims for July 21.