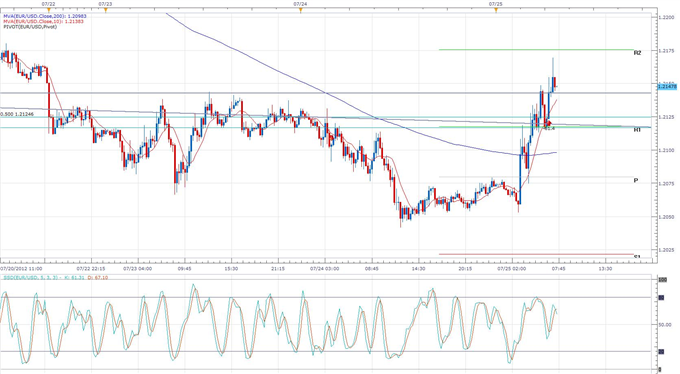 It’s been a wild European session, where the usually correlated Euro and Sterling diverged in trading against the US Dollar. Euro is beating USD by 0.55% so far, while Cable has dropped 0.08%.

Euro and Sterling both began to rally when European Central Bank council member Ewald Nowotny said he would consider arguments in favor of giving a banking license to the ESM permanent bailout fund. This would give the ESM access to ECB lending and ease concerns about a lack of availability of funds for bailouts to Italy or Spain.

This news sent the Euro on a rally that continued for multiple hours, bouncing back from 3 days of selling off. As of 11:00 GMT, the Euro had made a 90 point rise against the US Dollar over the course of the session. The 50% expansion line from May’s high to June’s low at 1.2234 could provide the next resistance.

However, Cable lost all of the initial gains from Nowotny’s comments when the UK GDP for 2Q was reported as contracting for the third straight quarter. The 0.7% quarterly drop was lower than the -0.3% expected GDP loss, sending GBPUSD on a 70 point drop to 1.5470. Cable eventually made up for most of these losses, and is currently trading close to today’s open at the 1.5500 resistance line.

In other European news, Germany sold 30-year bonds in today’s sale for a record low yield of 2.17%. In other German news, the IFO business climate survey set a new 2-year low, but was still generally positive at 103.3.

Traders should keep an eye on US equities today, to see if the S&P will confirm the risk appetite seen in today’s currency trading.