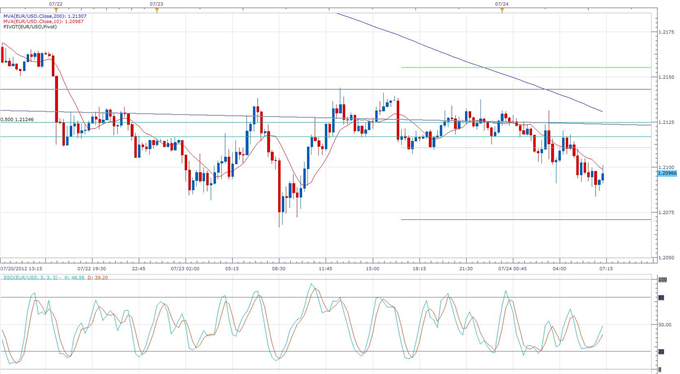 Worries about the Spanish and Greek debt crisis continue to pressure the markets for a second day. IMF and ECB representatives arrive in Athens today to discuss the next disbursement to Greece, however the tone has already turned negative, as PM Samaras said the economy’s recession could surpass 7% this year. While Samaras reiterated Greece’s respect for the bailout terms, he said they will have to make some changes to the conditions for the terms to be met. On the positive side, Samaras forecasted a drop from the current 24% unemployment to 10% within 4 years.

In more positive new, despite a rise in borrowing costs, Spain sold 3.05 billion euros of bills, beating its 3 billion maximum target. 3-month and 6-month bill yields rose the most in eight years from June’s sale to today, and Spain’s benchmark 10-year bond yield rose 9 basis points in the secondary market to 7.48%. So, despite a successful sale, the Spanish borrowing costs are still higher that acceptable.

The other story that affected Euro trading today, was the release of Euro-zone manufacturing and services PMI estimates. Although, the composite PMI was unchanged and expected at 47.6, lower than expected German PMI’s sent EURUSD briefly underneath 1.2100.

The Euro bounced back above the psychological resistance/support line at 1.2100 after the PMI release, before falling again as the Greek PM forecasted worse recession numbers. Yesterday’s 2-year low at 1.2066 should provide light support, beyond that little support will come in ahead of the 1.2000 line.

In other news, German and Luxembourg ministers refuted Moody’s outlook change to negative for the safer Euro governments. Also, UK mortgage approvals during June unexpectedly dropped to 26,269; this had little effect on Sterling trading. French business confidence dropped 2 points to 90 in July.

Looking ahead, the Spanish debt costs and Greek bailout package stories will continue to influence risk sentiment. Also, Canadian retail sales and the Richmond Fed Manufacturing Index will be released in the North American session.