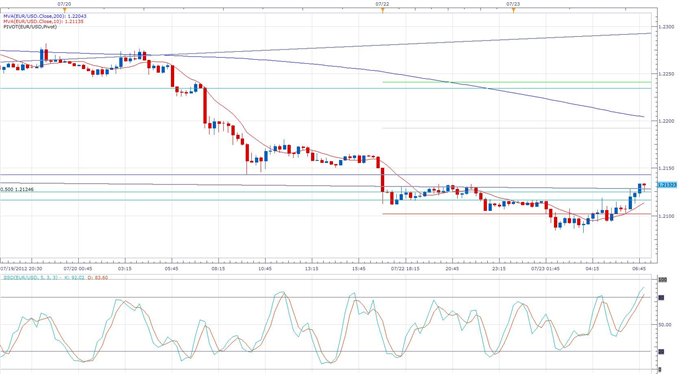 The Euro continued to set new lows in the first half of Monday’s European session, briefly dipping below the 1.2100 psychological support for the first time in two years. News of the European finance ministers only coming to a minimum agreement on the Spanish aid deal, combined with the German Vice Chancellor Roesler’s skepticism that Greece could be rescued, provided the fundamentals for continued declines in EURUSD from Friday’s close into Monday’s open.

The IMF and ECB will arrive in Athens tomorrow to see if the Greek government will be able to stand by the deficit cuts it agreed to at the onset of the current bailout deal. Roesler said over the weekend that Germany wants Greece to fulfill its debt cutting obligations in order to receive the next round of aid.

Further adding to Euro worries, local news reported that the Spanish region Murcia may follow Valencia in asking the state for aid. Overnight, we also heard negative comments from Asia; the Bank of Japan governor said monetary expansion alone will not boost economic growth and the PBOC lowered its forecast for Chinese economic growth.

On early Monday afternoon, EU comments on Greece relieved some of the pressure on the Euro. The EU said they are confident that further disbursement for Greece will take place, although it is unlikely to happen before September. They added that Greece will remain part of the Euro-zone.

The comments boosted EURUSD 20 points above the 1.2100 support line. Euro is still significantly losing to US Dollar in today’s trading, and the next resistance lies at 1.2125, which is the 50% retracement from EURUSD’s all time high to its all time low. A few points above there is resistance from a downward trend line beginning in June 2012.

Later today, traders should stay alert for the Euro-zone consumer confidence for July, which will be released at 14:00 GMT. At 12:30, the Chicago Fed will release their national activity index for June.