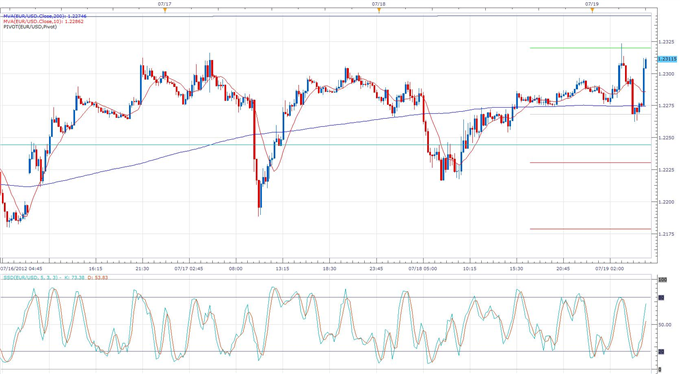 European session traders were disappointed to see a Spanish debt sale that brought in higher yields and missed a 3 billion maximum target by 20 million Euros. Spanish 2014 bonds were sold at 5.204% yield, compared to 4.335% in June, and 5-year notes were sold at 6.46% in today’s sale, up from 6.07% at the June 21 sale.

The higher than expected Spanish borrowing costs show a dropping confidence in the struggling economy. The German house will most likely approve the EFSF 100 billion euro aid package to Spain; however German Finance Minister Schaeuble told lawmakers that the Spanish government would be responsible for the bailout loan. The minister further said that direct bank recapitalization can only happen under a condition of sovereign liability. This means that Spanish government debt will likely rise with the upcoming bailout package, thereby further lowering confidence in Spanish debt.

Meanwhile, French 2017 notes were sold for 0.86% yield, down from 1.43% in the last auction, as investors flock to the relatively safer French economy.

The European session opened with equities up over 1%, this sent the Euro twenty points past the short term support of 1.2300, however the gains were temporary as both EURUSD and European stocks quickly reversed most of those gains. Following the news of the Spanish debt sale, the Euro dropped closer to 1.2250, slightly above the 50% expansion from May’s high to June’s low.

In other European news, UK retail sales (excluding auto fuel) rose 0.3% in June, though still disappointing expectations for a 0.4% rise. Swiss exports were also down 2.6% in the month of June.

A lot of data is coming out of the United States today, including existing home sales for June, leading indicators, and the Philadelphia Fed. for July. Traders should also watch out for the results of the German Lower House vote on the Spanish aid package.