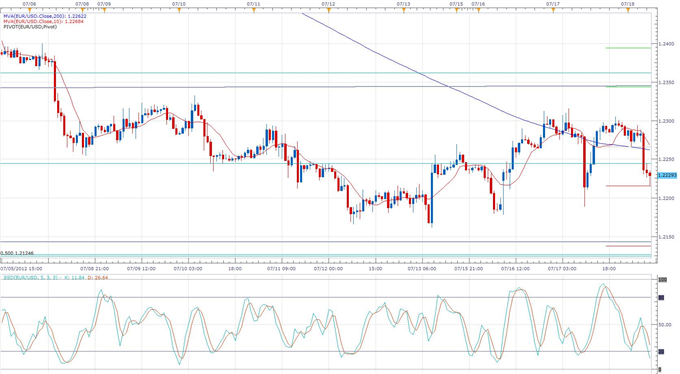 The fear that was seen driving both the Euro and Sterling lower against the safe haven US Dollar in today’s European session, was fueled by comments made by German Chancellor Angela Merkel. Merkel said that the ‘European project’ is still in jeopardy and called on policy makers to work harder to help it succeed. Merkel then reiterated her opposition to burden sharing without increased joint oversight.

No sooner than Merkel’s comments were released, did German 2-year notes sell for a negative yield for the first time at a government auction, further showing an increased demand for safer bonds. The Euro also dropped against the US Dollar at the time of Merkel’s comments, falling from resistance at 1.2300 towards last week’s 2-year low at 1.2162.

EURUSD traders should also be aware of the 50% Fibonacci retracement level from the pair’s all time high to its all time low, at 1.2125, as noted by John Kicklighter is his daily wrap up.

Before dropping on Merkel’s comments, GBDUSD also sold off on news that the Bank of England is considering an interest rate cut, depending on the assessment of recent lending measures, according to the minutes from the BoE’s July meeting. At the same time, the 3-month unemployment rate dropped to 8.1% in May, which could reverse the pressure placed by the dovish minutes.

Later today, Bernanke will give his semiannual report to the U.S House at 14:00 GMT, and the Bank of Canada also releases its monetary policy report.