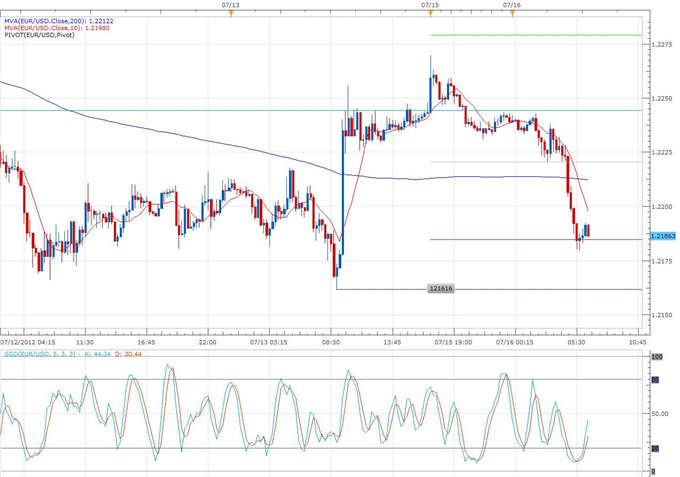 While European leaders from France, Italy, and Spain have been calling for swift action to put out the fires of the European economies that are burning around them, the German Federal Constitutional Court delayed its ruling on the permanent European Stability Mechanism bailout fund by 8 weeks. The 500 billion-Euro ESM is unlikely to be activated before the September 12 ruling on whether Germany can participate in the fund.

Additionally, German Chancellor Angela Merkel told broadcaster ZDF that Germany will only agree to a banking union with a financial overseer if joint oversight is included on a ‘new level’. These recent German roadblocks tare down some of the hopes built up after the seemingly productive EU summit at the end of June.

Moody’s said earlier today that a delay in the German court ruling is credit negative for all European sovereigns, and currency markets showed risk-off corrections in today’s trading. EURUSD erased almost all of Friday’s gains in today’s trading, dropping below 1.2200 and re-eyeing the 1.2162 2-year low set last week.

The other possible catalyst seen in today’s drop in Euro was the steady and light annual inflation, the rate for June maintained a one-year low at 2.4% for the second month. The steady inflation rate confirms comments from the ECB monthly report that inflationary pressures are dropping, and it is possible that lowered inflationary pressures and a faltering economy could lead the ECB to cut their interest rates again, following July’s 25 basis points cut to 0.75%.

In the North American session, the US empire manufacturing and advance retail sales may affect market action, both are set to be released at 12:30 GMT. Also, the International Monetary Fund will release its most recent global growth expectations this afternoon.