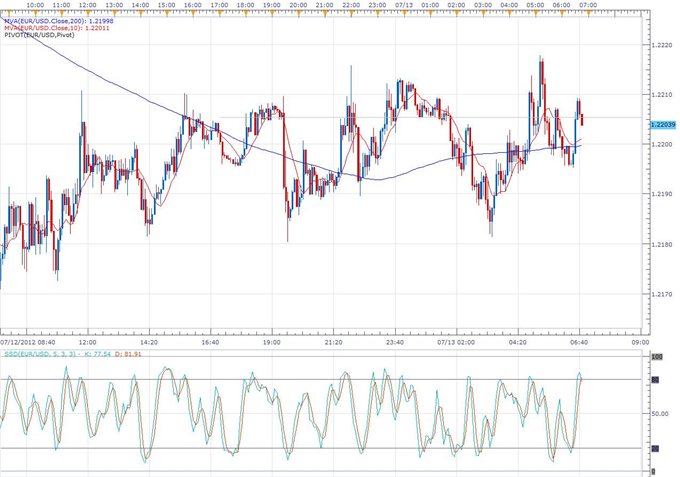 The main conclusion that can be drawn from today’s European session is that credit ratings are sometimes unimportant. On the morning after Moody’s downgraded Italy’s debt rating from A3 to Baa2, Italian 3-year bonds sold for 4.65% yield, a drop from the 5.30% yield during June’s sale. 2-year notes also dropped 14 bps during the sale to 3.67%, although 10-year bond yields were up to 5.82% from their last sale in May, when yields were 5.66%. In total, Italy sold 5.25 billion Euros of debt, matching their maximum target. EURUSD jumped up 18 points on news of the sale before returning to initial levels.

The bond sale interrupted what was otherwise an uninteresting European session for its major currencies. So far in today’s trading (as of 10:11 GMT), Euro is losing to the US Dollar by 0.02% and Cable is up .13%. GBPUSD is slowly consolidating after hitting support yesterday at an upward trend line dating back from 2009, next possible resistance comes in at 1.5475. EURUSD is struggling in today’s session to rally back above yesterday’s new 2-year low.

Additionally, the Bank of England released the details of its lending plan, which will provide up to 80 billion pounds of credit to companies and households. Starting August 1, banks will be able to borrow treasury bills from the BoE to use as collateral for additional lending to the economy. The release of the details only gave cable a brief boost before the pair fell back to earlier day levels.

China GDP was reported overnight to have had the slowest growth in 3 years during Q2, although the growth was still as expected and moved Aussie and Kiwi higher against the US Dollar in the European session, both pairs are currently up 0.32%.

In other European news, Italian annual inflation for June was confirmed at 3.6%, which was in line with preliminary estimates.

During the North American session, traders should watch out for the University of Michigan Confidence survey which is set to come out at 13:55 GMT. Second quarter earnings reports for JP Morgan and Wells Fargo could also affect the markets.