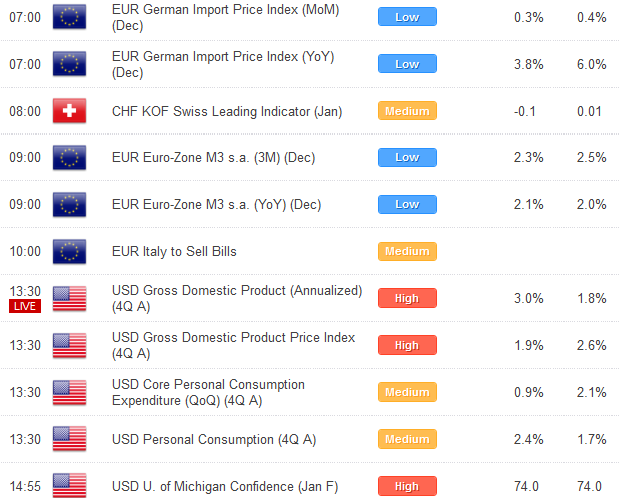 The Euro has now rallied some 5% off its lows from early 2012 and at this point, it might be worth starting to consider the possibility for bearish resumption over the coming days. While we wouldn’t at all be surprised to see a bit more of a correction towards 1.3500, ultimately, this market is locked within a much more significant downtrend off of the 2008 record highs which projects continued weakness down towards the 1.2000 area over the coming months. Fundamentally, whether or not there is actually a formal resolution on Greece seems to be less and less relevant by the day, with the Eurozone still very much riddled with deep structural deficiencies, while still posing major systemic risk to the global macro economy. The elevated stress in Portugal over the last few days should not go unnoticed as this clearly reflects the fragility of the entire Eurozone and potential domino effect should things continue to deteriorate.

Although the Fed has indeed signaled that it will keep rates on hold for even longer than even some of the doves had thought, we still see value in the US Dollar at current levels despite the unfavorable yield differentials. In fact, we still see value in the US Dollar against most major and minor currencies, with the Greenback still very much looking like it is carving out a material longer-term bottom. We continue to assert that the US economy was the first into the global crisis and will end up being the first to emerge from the depths of the economic turmoil. This should present attractive investment options in the United States despite the negative carry. Even still, we see the US Dollar benefitting as other economies continue to adjust monetary policy to the more accommodative side which in turn will narrow yield differentials in favor of the buck.

Technically, on the shorter-term time horizon, the Euro has just now put in a very bearish gravestone doji formation after the market stalled out on Thursday and closed back by opening levels. Again, we are not necessarily calling the top right here, but could see this as the beginning of the end for the Euro rally, which might stall into next week, even if it does manage to extend a little further. US equities are also offering some additional clarity at current levels, and here too we see the market on the verge of a major bearish reversal. We do not believe that the equity markets are appropriately discounting the broader fundamentals and see the current levels as far too close to record equity levels we saw in 2007. In our opinion, given the state of the global economy, equities need to be decently lower from current levels. As such, look for a reversal in equities over the coming days, which also should help to inspire additional US Dollar bids as things correlate.

The Yen which also has a strong tendency to rally in risk liquidation environments could be at risk for a move back towards its record lows from October on these developments, but we still see additional Yen appreciation as limited even with resurgence in risk aversion, given the Japanese government’s distaste for such a strong Yen. Clearly there has been a negative impact on the local economy, with exports suffering as a result, and the idea that the Yen should benefit on broader external safe haven flows should prove to be a difficult task with the MOF and Bank of Japan willing to act at any moment. Another market worth watching should risk liquidation themes return is EUR/CHF, with this cross dangerously close to testing the critical 1.2000 floor that the SNB has been adamantly protecting. It will certainly be interesting to see if there is another aggressive round of intervention from the SNB or if the market can challenge the central bank’s credibility.

Finally, we have been aggressively bearish on the commodity currencies for some time now, and will hold onto these convictions over the coming months as we see a dramatic shift in the attitude towards these currencies. While at present they continue to offer an attractive yield and alternative to the crisis ridden US and Eurozone economies, we are very certain that these economies will soon feel the impact of the global crisis just as severely as we have seen in the US and Eurozone. China is a huge variable here and once which we feel will result in the third wave of the global crisis, which ultimately will weigh quite heavily on the highly correlated commodity bloc and emerging market economies. We see China slowing more dramatically over the coming months and this should force a massive flow of funds away from the commodity linked currencies and back into the more liquid major FX markets. Markets always have a good way of testing our convictions, begging us to doubt what we believe to be true, and trying to convince otherwise. But we will not waver in our outlook here, and remain aggressive US Dollar bulls over the coming months and at the same time aggressive commodity currency bears (specifically Aussie and Kiwi).