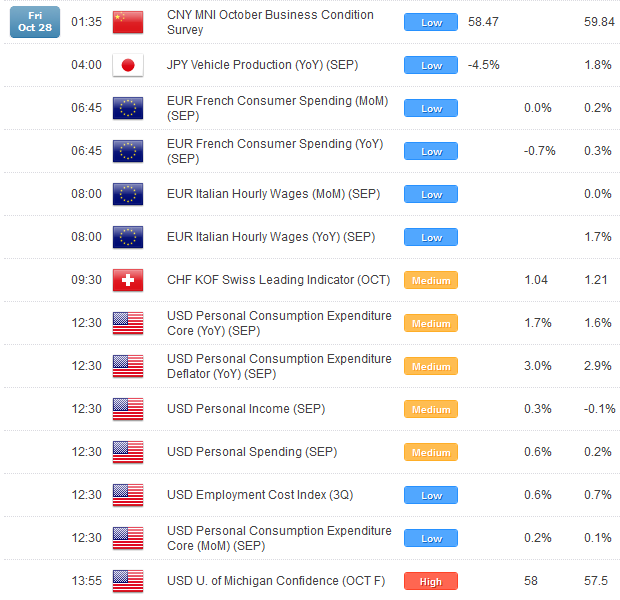 Naturally, we have seen some minor consolidation and short-term profit taking following Thursday’s parabolic price action. At this point, the post EU Summit euphoria could be fading, and with currencies so stretched, we would not at all be surprised to see a more significant pullback in these markets in favor of the buck into the weekend. There is still serious reason for skepticism with the latest EU package, and many doubts remain. Will the leveraged EFSF really be able to reduce funding costs substantially? We think not. Will growth in the region suffer a great deal due to the burden of aggressive austerity measures? We think yes. Is it possible that Greece will not be able to sustain debt at 120%? We think yes. Is it possible that non-bank holders of Greek debt will try to walk away rather than accepting an enormous haircut? We think yes. Could the disastrous CDS experience cast a darker cloud and shake the credibility of EFSF guarantees? We think yes. Finally, are there other countries like Portugal and Ireland that still could pose a serious risk to the Eurozone economy? We think yes.

While the currency rally in October has been aggressive and intense, technically, it still looks as though the Euro is carving out a lower top on the monthly chart ahead of the next major downside extension towards the 1.2000 area. The US Dollar has been hit very hard across the board in October and yet, the Euro is still trading below September’s 1.4390 highs. Given our doubts expressed above relating to the Eurozone package and recovery, and given the broader technical outlook, we would continue to argue that current levels in the market offer a formidable opportunity to be looking to rebuild core long US Dollar positions in anticipation of resumption of the type of buying that we had seen in September. The Australian Dollar has also been extremely bid in recent trade, but here too, we see a market that has been unable to take out the previous monthly high and still could be in the process of carving a major top. The recent rally in Cable also inspires confidence for a bearish currency resumption, with this market finally reaching the measured move objective (just over 1.6100) off of a major double bottom triggered on the break above 1.5715 several days back. Look for the 200-Day SMA to now cap additional gains in favor of the next major downside extension into November.

Looking ahead, the economic calendar in Europe is quite light, with the only notable release coming in the form of Swiss KOF. Things pick up a bit into North America, with US personal consumption, spending and income due along with the later release of Michigan confidence. US equity futures and oil prices are tracking moderately lower, while gold is slightly bid. We anticipate a volatile Friday session of trade with most of the price action likely to come from traders who have been too aggressive with their EU package optimism and are looking to head to the exits as quickly as they can. We are going to hold our broad based bullish USD outlook and will be looking for a sharp reversal into November which more accurately reflects the price action seen in September. As for the Yen, we also see significant weakness ahead, but do not rule out the potential for a break below 75.00 barriers in Usd/Jpy before this major reversal transpires. It will be interesting to see how things play out. 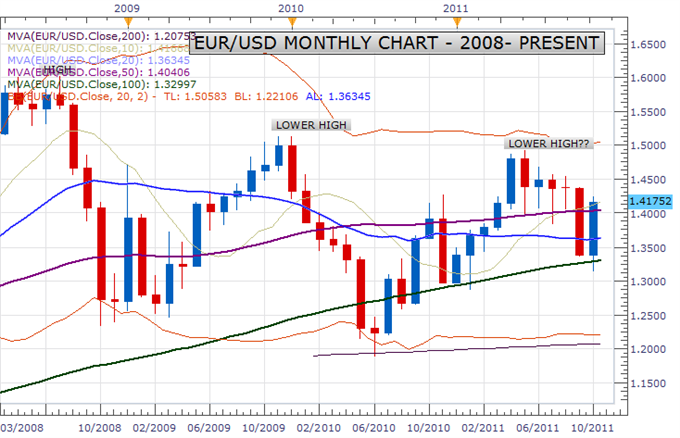 EUR/USD: It has been very difficult to retain a bullish USD outlook in the short-term, with the Euro rallying so aggressively in the month of October. However, we continue to take our cues from the longer-term monthly chart which shows a different picture and significantly mitigates the USD beating on the daily chart. The monthly chart shows the market in a downtrend off of the record highs from 2008 and in the process of carving the next lower top ahead of a move back towards the 1.2000 area. Despite the latest surge in October, the price is still holding below September’s high and we look for gains to stall out somewhere ahead of 1.4390 in favor of a bearish resumption. Ultimately, only back above 1.4390 would delay and give reason for concern. 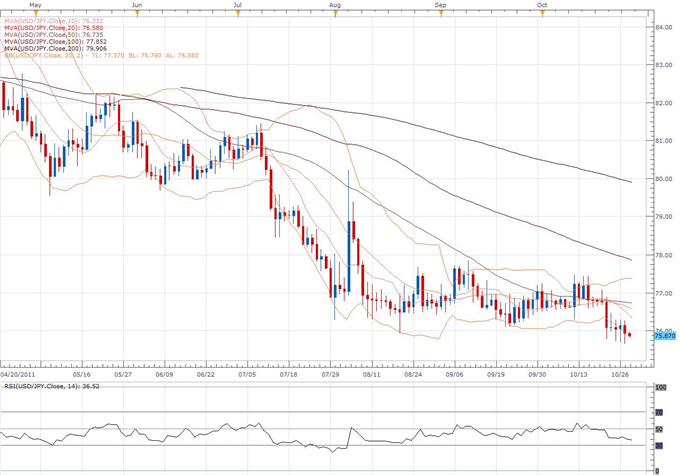 USD/JPY:Although the market remains largely continues to trade around the 76.00 figure, the recent break to fresh record lows below the figure suggests that we still could see additional weakness before any meaningful recovery rally. At this point, a break back above 78.00 will officially be required to alleviate immediate short-term downside pressures, while back below 75.50 will accelerate declines towards major psychological barriers at 75.00. 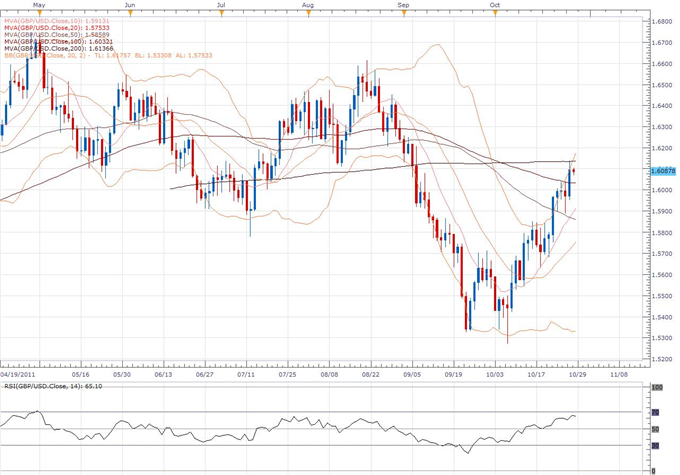 GBP/USD: The market has finally reached the major double bottom objective just over 1.6100 that was triggered on the break of neckline resistance at 1.5715 back on October 12. From here, scope is for a resumption of what we believe to be a broader downtrend and we expect the 200-Day SMA, which coincides with the double bottom objective, to cap gains on a daily close basis ahead of the next major downside extension. Look for a break back below 1.5950 to confirm and accelerate, while only a close above the 200-Day SMA negates. 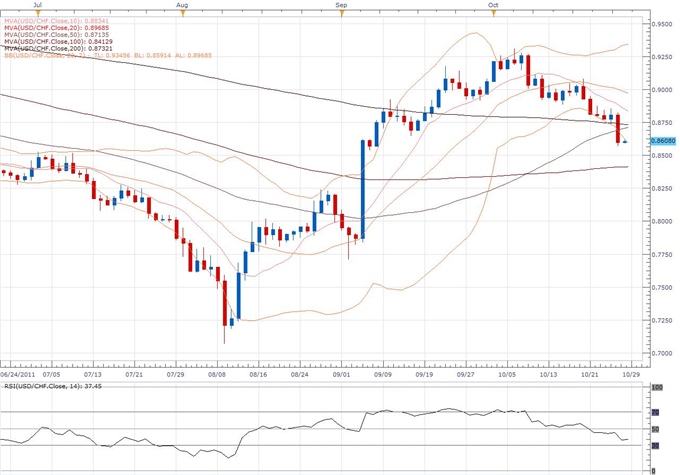 USD/CHF: The market has been in the process of a major correction since peaking out at 0.9315 on October 6. However, the overall outlook remains constructive, with the pair looking like it is in the process of carving a major base ahead of some major upside over the coming weeks and months. Look for the current round of setbacks to be well supported in the 0.8500 area from where a fresh medium-term higher low is sought out ahead of a bullish resumption back towards and eventually through 0.9315. Ultimately, only a weekly close below 0.8500 would concern.