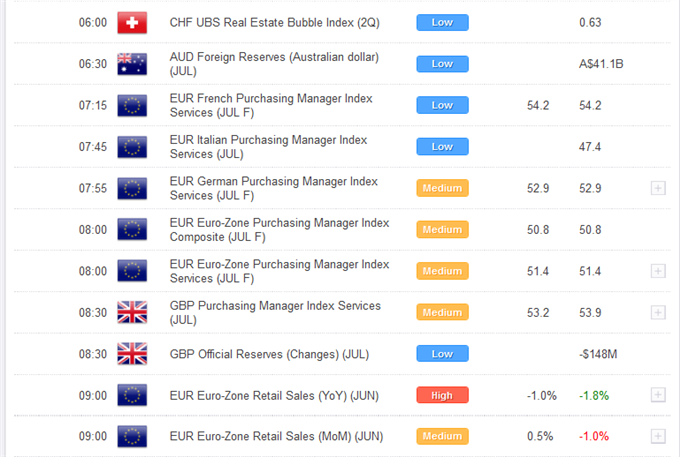 The Eurozone bailout and US debt ceiling rise are finally behind us and yet markets are even more pressured than they were pre-government action. Markets are clearly caught in a state of turmoil, with very little room for any confidence. The fact that the debt crisis in the Eurozone is still very real, and the fact that the US debt ceiling resolution is only seen as a short-term bandage on some even bigger structural deficiencies, has not sat easy with market participants, and there has been little choice but to liquidate all risk correlated assets in a massive flight to safety.

US equities have been obliterated in recent trade, while most currencies have ben selling off sharply in favor of the more attractive safe haven bids in the USD, Yen and Swiss Franc. While the US Dollar and Yen have their traditional safe haven appeal, it is the Swiss Franc that continues to dominate. The Franc has been surging to record highs against many of the major currencies (USD, Euro, Gbp), with traders very aware of the weakness in the US economy and instability in Japan. The Swiss economy remains relatively healthy, and this in conjunction with the already safe-haven appeal of the Franc, make the currency the clear choice for safe haven bids.

At this point, the only thing stopping the Franc from additional appreciation would be some form of active intervention to slow the rapid rise in the currency. However, after being burned so badly on attempts to intervene on behalf of the Franc in 2009 and 2010, the SNB seems to be quite frightened with the prospect of having to reenter the market. The Bank of Japan is in a similar predicament, and while the appreciation in the local currency is imposing a major strain on the economy, there seems to be very little that either central bank can do to stop impenetrable market forces.

The price action in these currencies has however been excessive and we would suggest that some form of official comment will emerge over the coming sessions in an attempt to curb the appreciation. Perhaps the most effective solution would be for a coordinated response to the rapid appreciation in both the Franc and Yen. But with global equities under intense pressure, US economic data continuing to disappoint, and the threat of a rating agency downgrade to the US still a very real possibility, we are fearful that even intervention will have a negligible impact on the markets. While Fitch was out on Tuesday announcing that the US government’s AAA rating would not be changed, they could not rule out the possibility that the outlook for the country wouldn’t be revised to negative.

Moving on, we have finally begun to see signs of topping in both the Australian and New Zealand Dollars, after the antipodeans were hit rather hard on Tuesday and pulled back quite significantly off of the recently established post float record highs. We had been warning of relative weakness on the commodity bloc, as we felt that these currencies were not properly reflecting global macro sentiment, and Tuesday’s deep setbacks confirmed our suspicions, with these markets finally relenting. From here, we see risks for more significant declines on the commodity bloc over the medium-tem.

Once the markets get into panic mode it is very hard to wash away the fear, and many are even more panicked now than in 2008 with little room from here for additional stimulus efforts to help prop the global economy. Talk of QE3 has been making the rounds over the past few days and while the use of such measures might be helpful on the surface, the fact that that all accommodative stimulus measures have been virtually exhausted, leaves very little in the way of anything more any central bank or government can do. Perhaps some form of a coordinated response to the latest volatility will be forthcoming, while any signs of improved economic data out of the US would also be a welcome development. 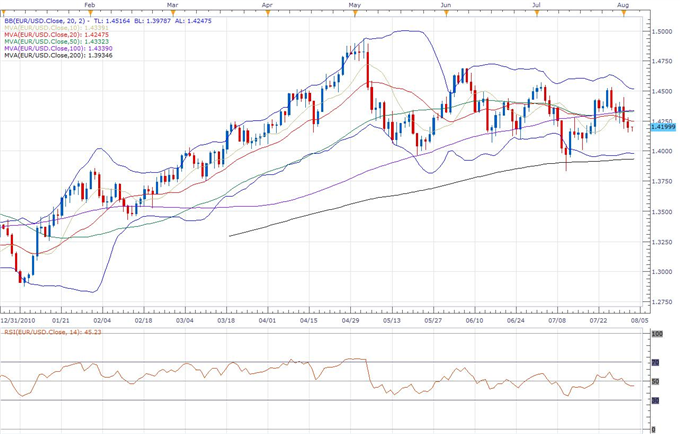 EUR/USD: The market continues to adhere to a bearish sequence of lower tops since May, with a fresh lower top now likely in place by 1.4535 ahead of the next downside extension back towards and eventually below 1.4000. In the interim, look for any intraday rallies to be well capped ahead of 1.4400, with back under 1.4135 should accelerate declines. Ultimately, only above 1.4535 would negate outlook and give reason for pause. 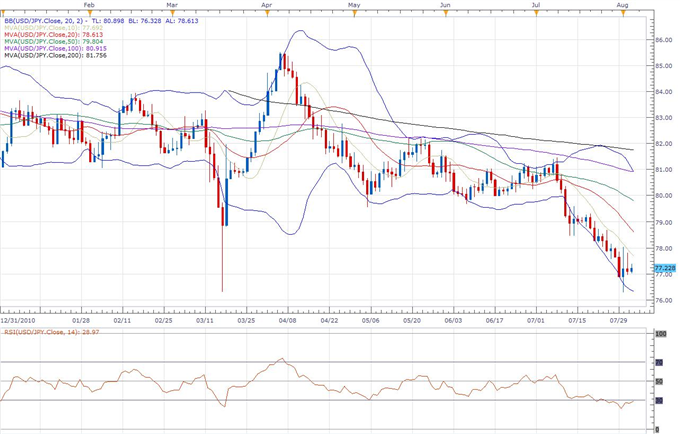 USD/JPY: Setbacks have stalled out for now just ahead of the 76.25 record lows from March, with the market dropping to 76.30 ahead of the latest minor bounce. However, the bounce is somewhat significant on a short-term basis, with the market putting in a bullish outside day formation on Monday to suggest that the price could once again be very well supported in favor of a major upside reversal over the coming days. Look for a break and close back above 78.05 to confirm bullish reversal prospects and accelerate gains towards 80.00, while back below 86.25 negates and opens the door for fresh record lows. 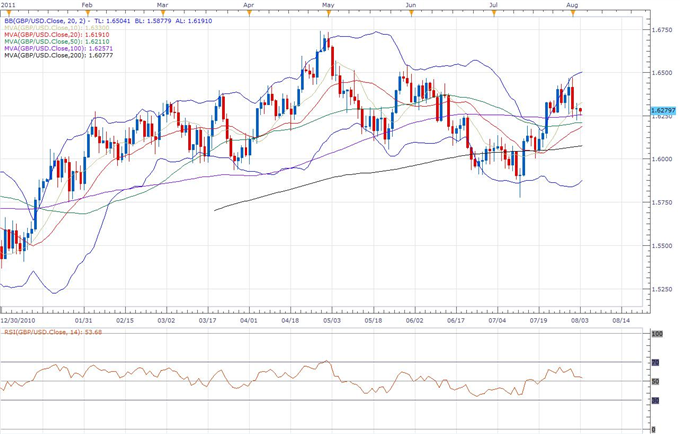 GBP/USD: Despite the latest rally back above 1.6400, the market still remains locked in a broader downtrend off of the April highs, and a fresh lower top is now sought out somewhere ahead of 1.6550 in favor of the next downside extension back towards the recent range lows at 1.5780. Monday’s strong bearish outside formation could very well set up the next lower top by 1.6475, and we look for a break and close back below 1.6200 to confirm and accelerate declines. Ultimately, only a break back above 1.6550 would delay bearish outlook and give reason for pause. 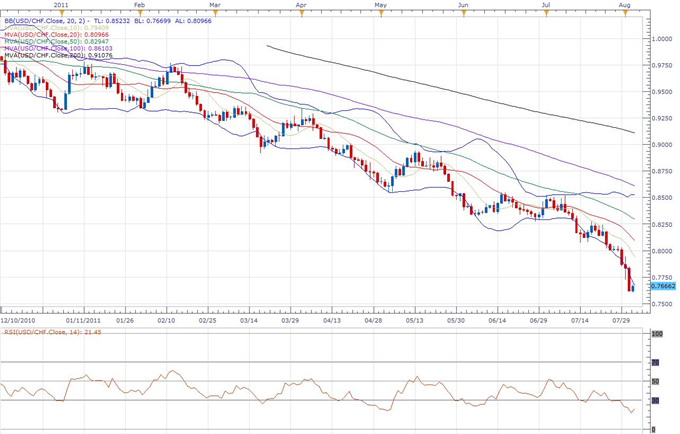 USD/CHF: Despite the intense downtrend resulting in recently established fresh record lows below 0.7700, short/medium/longer-term technical studies are looking quite stretched to us, and we continue to like the idea of taking shots at buying in anticipation of a major base. Still, at this point, fading this trend will require some upside confirmation and we would look for a break back above 0.7860 at a minimum to open the door for these reversal prospects and alleviate immediate downside pressures.