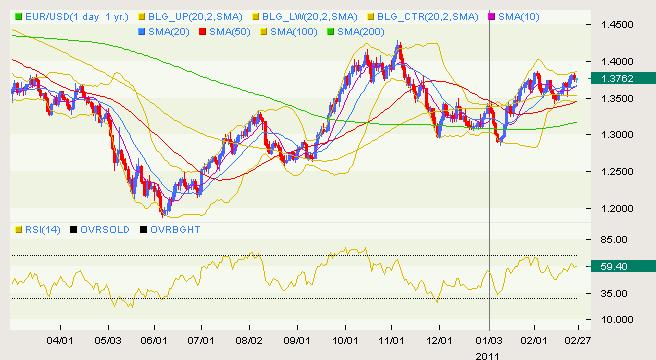 Despite stalling out ahead the critical short-term resistance at 1.3860 on Friday, the Euro still remains bid on dips for now, and we will need to see a break and close back below 1.3700 to alleviate topside pressures and encourage prospects for any kind of reversal. For now, currencies in general remain very well bid against the buck, with the Swiss Franc just off record highs on safe haven bids and some better than expected KOF data, and the Yen similarly bid on risk aversion and geopolitical concerns. Meanwhile the Canadian Dollar has also mounted an impressive rally as USD/CAD drops to fresh multi-month lows below 0.9800. Although the antipodeans have been less bid of late, there is still some solid demand for these currencies, with Aussie trading back towards 1.0200 and Kiwi recovering from its post earthquake lows to trade back above 0.7500.

New Zealand trade data has come out slightly better than expected on Monday, and this has helped to fuel some additional bids, although comments from NZ FinMin English have offset some of these gains, after the official said that the damage from the earthquake would lead to slower H1 growth and that it would also help to fuel speculation of a rate cut over the coming months. English added that the government would be bearing the full cost of the reconstruction and would be looking to take on some short-term debt. Meanwhile in Australia, private sector credit came in as expected, and the single currency managed to regain any initial setbacks in early Asian trade, despite comments from China’s Wen that the target for average annual GDP growth would be revised lower to 7.0% over the next 5 years from the 7.5% target that had been in place in the previous 5 years.

As we head into the European open, the Euro trades relatively flat on the day, but has found some additional support overnight on weekend comments from ECB Draghi who said that monetary policy in the Euro area was is set to be tightened. Draghi expressed concern over the threat of inflation and the need to return to normal monetary policy. Elsewhere, many have been talking of the potential impact of the Irish elections with the newly elected Irish PM Kenny already rumored to have warned Germany’s Merkel and France’s Sarkozy that a massive Irish backlash against austerity measures means that the current Eur72B bail-out will need to be renegotiated. Finally, Japanese industrial production has come out a good deal lower than expected, but the data has failed to materially influence price action.

Looking ahead, the calendar in European trade is rather light, with German import prices (1.1% expected) due at 7:00GMT, followed by Eurozone inflation data (-0.6% expected) at 10:00GMT. US equity futures are flat, while gold is marginally higher. Oil on the other hand remains very well bid and is leading the way in early Monday trade (up nearly 2% at $99.55). 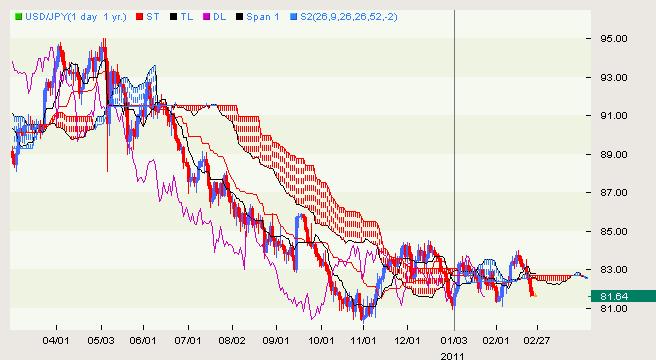 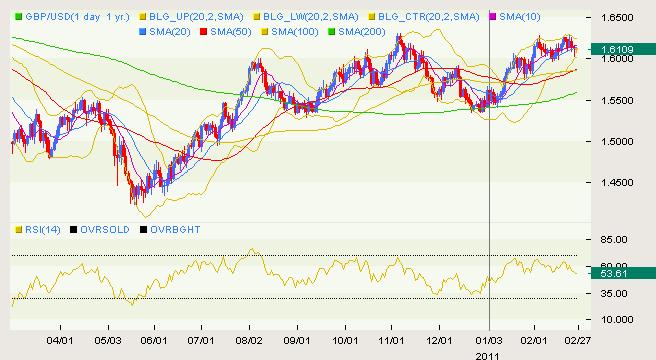 GBP/USD: The market largely remains locked in some consolidation after continuously stalling out by and ahead of key resistance at 1.6300. From here, it is difficult to establish a clear directional bias and we will need to see a sustained break above 1.6300 or daily close back below 1.6100 for additional clarity. 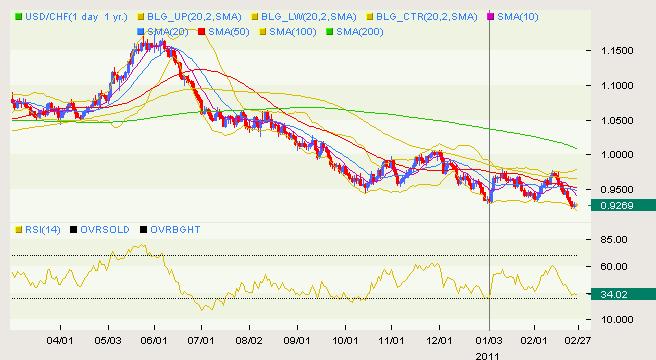 USD/CHF: The latest break to fresh record lows below 0.9250 is certainly concerning and threatens our longer-term recovery outlook. Still, we do not see setbacks extending much further and continue to favor the formation of some form of a material base over the coming weeks in favor of an eventual break back above parity. From here, big figures become key support as we are in unchartered territory, while a break back and close back above 0.9320 would be required to relieve immediate downside pressures.