Gold and Silver Prices Down for 6 Days. Will Support Hold Before Jackson Hole?

Gold and Silver prices came under selling pressure to start the new trading week. Taking a closer look reveals that their weakness was likely an extension of price action seen last week. Since the end of July, the markets have been gradually paring back 2023 dovish Federal Reserve policy expectations. At one point, over 2 cuts were priced in for the next year.

The tides have been turning. All of those cuts have been almost fully priced out. In turn, this means the US Dollar has been rallying alongside Treasury yields. This is pressuring anti-fiat gold and silver prices. The latter compete with fiat currency (mostly the US Dollar) and the rate of return an investor can get for them.

There was not much event risk over the past 24 hours, but traders might have been focusing on what was ahead. This Friday Fed Chair Jerome Powell, along with other central bank governors, will be speaking at the annual Jackson Hole Economic Symposium. There, policymakers will have a chance to reinforce their commitment to fighting inflation that the world has not seen in 40 years.

Understandably, this might be leading to some investors taking off expectations of a Fed ‘pivot’. Over the remaining 24 hours, S&P Global US PMI data and new home sales will cross the wires. But, things will probably get more interesting later this week. In addition to Jackson Hole, US GDP and the Fed’s preferred gauge of inflation (PCE) will also cross the wires. You may view these outcomes on the DailyFX Economic Calendar.

XAU/USD has endured 6 days of consecutive losses, the worst losing streak in just a little over a year. This followed a test of the falling trendline from March, which was reinforced back in early August. Since then, gold confirmed a break under the near-term 20-day Simple Moving Average (SMA). Immediate support appears to be the 38.2% Fibonacci extension at 1732. Clearing this price could open the door to testing the July low at 1681. 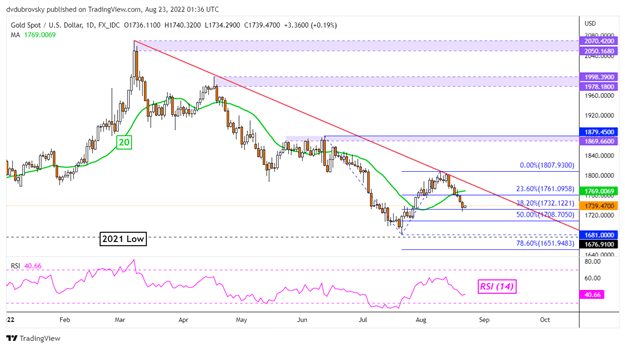 Silver prices also declined for 6 consecutive days, marking the worst losing streak since April. Last week was the worst 5-day performance (-8.49%) since September 2020. This resulted in a false breakout above the 50-day SMA. On Monday, XAG/USD did leave behind a Doji candlestick pattern, which is a sign of indecision. That is offering a neutral view. Breaking under the key 18.14 – 18.41 support zone would open the door to extending the broader downtrend. 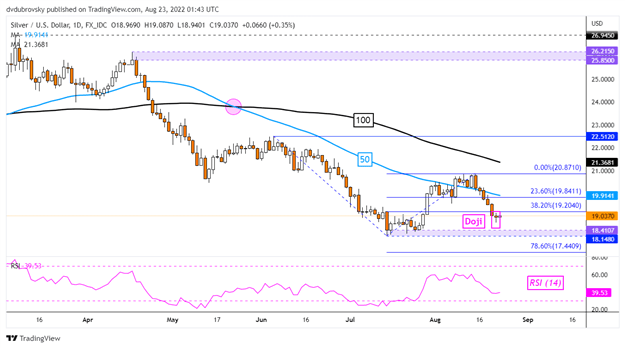