Gold prices were little changed on Thursday as the yellow metal was influenced by competing fundamental forces. The first was rising geopolitical tensions. XAU/USD rallied as reports crossed the wires that talks between Ukraine and Russia failed to make progress. Ukrainian Foreign Minister Dmytro Kuleba said that Russia “will continue their aggression until Ukraine meets their demands…”.

This was a noticeable turnaround from Wednesday when the yellow metal sank about 2.9%. That was when Ukrainian President Zelensky showed a willingness to negotiate with Russia. During Friday’s Asia-Pacific trading session, European Union leaders noted they would help Ukraine peruse a European path, adding that the country ‘belongs’ in the European family.

The situation remains volatile and further tensions could benefit gold into the close before the weekend. In addition to the commentary from the EU, the United States Senate cleared a USD 13.6 billion bipartisan funding bill for humanitarian and security aid in Ukraine. All eyes now turn to Vladimir Putin for his response.

Meanwhile, pressuring the yellow metal over the past 24 hours likely was the latest US inflation report. Consumer prices climbed 7.9% y/y in February, as expected. This means inflation continues to accelerate at its fastest pace in 40 years, prompting speculators to boost bets of a more hawkish Federal Reserve. The 2-year Treasury yield climbed to 1.7%, a new 2022 high. Follow-through over the remaining 24 hours may offer some resistance for gold.

On the 4-hour chart, gold appears to be carving out a bearish Head and Shoulders chart formation. The shoulder line appears to have been reinforced around 2002, with the neckline below near 1974. Clearing the latter could open the door to extending losses since earlier this week, though the 50- and 100-period Simple Moving Averages could stand in the way as support. Piercing the right shoulder would likely invalidate this chart formation, exposing the current March higher. 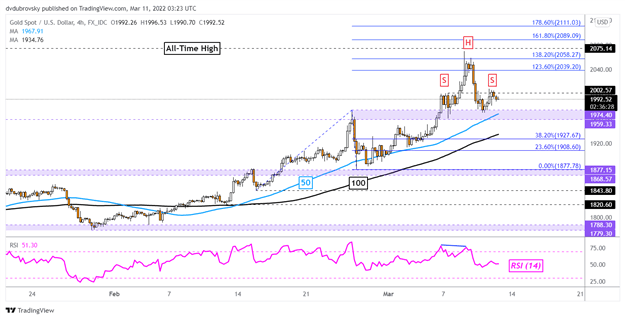