Gold prices are on the rise for a second week despite rising bond rates in the United States and Europe, spurred by increasingly hawkish monetary policy bets between the Federal Reserve and the European Central Bank. The chance for a 50 basis point rate hike liftoff at the March FOMC meeting stands at 24%, up from 8.5% on January 30, according to the CME FedWatch Tool. The ECB is looking at nearly 50 basis points of hiking by December, according to overnight index swaps (OIS).

The prospect of higher rates is a headwind for bullion prices, given that gold is a non-interest-bearing asset, but high inflation and recent volatility across equity markets, particularly in the US, has underpinned the bullish narrative for the yellow metal. That is because gold is a favored asset to hedge against volatility and inflation.

Inflation expectations have eased recently, reflected by falling breakeven rates, although this week’s US CPI report may revive the overall outlook over rising prices. Analysts expect to see a 7.3% y/y rise for January’s data due out later this week, according to a Bloomberg survey. That would be the highest rate of inflation seen since 1982. A better-than-expected print would likely further fuel Fed rate hike bets. While on face value that would be bad for gold, it could be worse for the equity market, which is highly sensitive to rate changes as they eat into the present value of future cash flows.

That said, if this week’s CPI print does firm up those bets and the equity market also reacts negatively, it may benefit bullion prices, as investors would likely shift to haven assets. The benchmark 10-year Treasury note’s yield has risen sharply over the last several weeks, and it is near the high-profile 2% mark, a level not traded at since July 2019. Gold’s ascent amid those higher yields supports the view that it remains attractive as a hedge against volatility. It’s also worth keeping an eye on tensions on the Ukrainian border, as an escalation may bolster prices further, given that a geopolitical event could spark more selling across risk-sensitive assets.

Gold is approaching a key level that has previously offered strong resistance. However, prices fell back through that level before the current rebound. The last breach put in a higher low from the November high and revealed a descending trendline that has acted as resistance. That said, a break higher may be short-lived. Alternatively, if prices fall, the 1800 psychological level and 200-day Simple Moving Average (SMA) may defend against further losses. 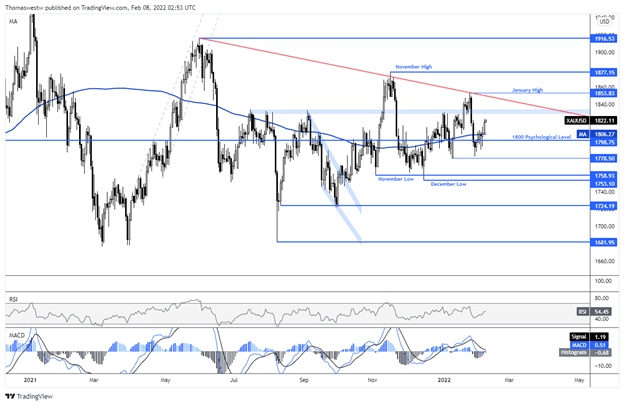