Gold prices broke a 3-day losing streak on Thursday and rose to a fresh weekly high before prices scaled back slightly during the Friday Asia-Pacific session. Despite the recent strength, XAU/USD closed out September with a 3.14% loss. A sharp rise in Treasury yields and the US Dollar was the main headwind for bulls last month. The 10-year note’s yield rose by the most since March.

A fresh round of Federal Reserve rate hike bets was the underlying driver behind those market shifts. The chance for a 25 basis point hike rose from 11.3% on August 30 to 15.9% on September 30 for the June 2022 FOMC meeting. Traders started to price in those higher bets following the September interest rate decision when the Fed’s dot plot – which outlines members’ rate forecasts – shifted forward, indicating a hawkish shift in policy among voting members. Higher interest rates increase the holding costs of gold.

The highly-anticipated non-farm payrolls report will cross the wires next week. Analysts expect to see 500k jobs added in September, according to a Bloomberg survey. That would more than double the gain from August when the US added only 235k jobs. However, labor data showed Thursday that initial jobless claims in the US rose to 362k for the week ending September 25, up from 351k the week prior. Treasury yields fell on the downbeat report, which sent gold higher. That said, bullion bulls may bid prices higher next Friday if the US jobs report misses estimates – as that would likely cool rate hike bets.

Traders will want to keep an eye out for inflation numbers heading into the weekend, although the focus will remain on next week’s NFP report. The United States’ personal consumption expenditures index (PCE) will cross the wires before Wall Street’s opening bell. The core figure – stripping out food and energy – is expected to cross the wires at 4.2%, according to a Bloomberg survey. Outside any large divergence from estimates, the data is unlikely to be a market mover for gold given the focus on jobs.

XAU/USD rose from support as prices construct a Falling Wedge pattern. The upside momentum appears to be cooling at the wedge’s resistance level, which could see prices fall back to support. Overall, this pattern gives prices a bullish bias. That said, a breakout could occur. The falling 26-day Exponential Moving Average (EMA) would be the most immediate resistance level above the wedge. 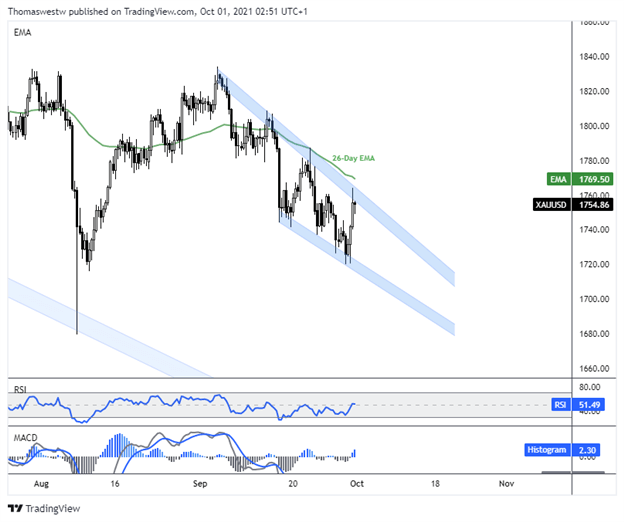