Gold prices are muted through the start of the trading week, with a lack of potential risk events leaving the yellow metal susceptible to prevailing risk trends. A surge in Treasury yields resulting from last week’s FOMC decision is weighing on prices. Higher government bond yields tend to dissuade holding the non-interest-bearing asset. The benchmark 10-year note’s yield is trading at 1.5% - the highest level since June.

This week doesn’t pose many event risks for gold prices, which leaves a bearish outlook amid higher yields. Next week’s non-farm payrolls figure will be in tight focus given the Federal Reserve’s focus on the labor market. That said, initial jobless claims will be the latest clue for market participants to digest before the highly anticipated jobs report.

An upbeat jobless claims report may help lift the consensus forecast for the September NFP report. Currently, the consensus forecast sees 513k jobs added in September, according to a Bloomberg survey. The Federal Reserve’s Lael Brainard spoke on Monday, giving an optimistic outlook for reaching full employment. However, Brainard also made clear that the bar to lift rates is higher compared to tapering asset purchases, stating:

“Once COVID constraints recede, I see no reason the labor market should not be as strong or stronger than it was pre-pandemic. The forward guidance on maximum employment and average inflation sets a much higher bar for the liftoff of the policy rate than for slowing the pace of asset purchases. I would emphasize that no signal about the timing of liftoff should be taken from any decision to announce a slowing of asset purchases.”

Iron ore prices received a small boost over the past week after positive data showing a reduction in stockpile levels in Chinese shipping ports fell, according to Bloomberg data. However, a potential housing crisis in China is putting a bearish bias on construction materials. Those fears arose earlier this month when China’s Evergrande group ran into trouble servicing some of its interest payments on offshore and onshore bonds.

Moreover, larger headwinds to the metal ore’s price remain. China has moved to cut steelmaking across the country in an effort to reduce emission levels. Analysts expect policymakers to keep those steelmaking caps in force as the 2022 Winter Olympic Games in Beijing approach. China is pushing to become a leader in green energy, and its energy policies will be under increased scrutiny as it hosts the world’s largest sporting event.

Gold prices are marginally higher this week following three consecutive weekly drops. The 38.2% Fibonacci retracement level from the July/August move appears to be offering resistance. If bulls stage a rally, the falling 26-day Exponential Moving Average (EMA) will be in focus and then the 61.8% Fib. RSI is trending neutral, while MACD weakness appears to be easing. 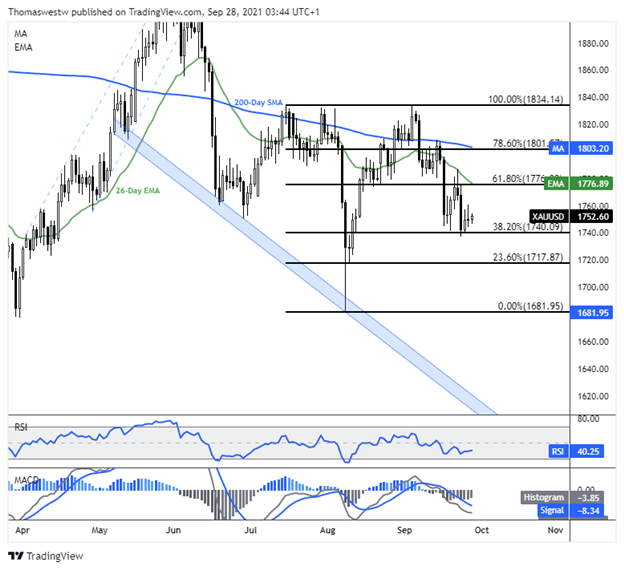 Iron ore prices found support at the October 2020 low following a brief series of intraday moves below the level. Support from a descending channel gave a confluent degree of support over the past week. If prices hold above that October low, channel resistance will shift into focus. RSI is in oversold territory, and MACD is turning higher, which may suggest some upside energy may form. 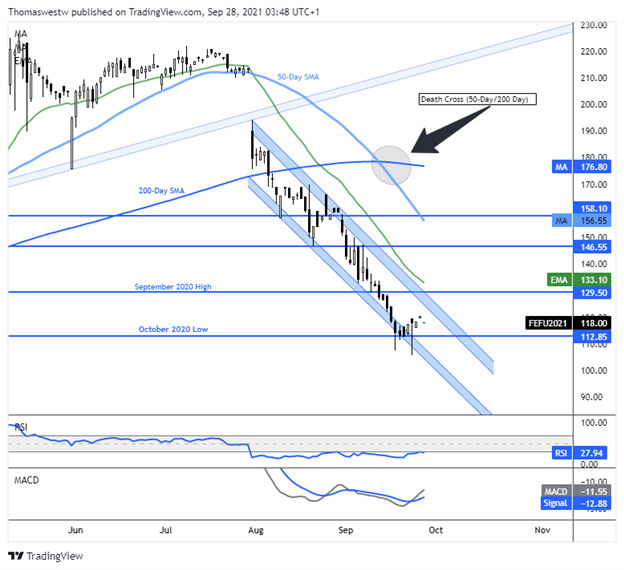