Gold is on track to break a two-week losing streak after the haven asset attracted inflows driven by the possibility of a credit crisis in China. The riskof a collapse was reduced after Evergrande announced it would post coupon payments for its 2025 bound due September 23. That came just minutes before mainland Chinese markets opened Wednesday.

Before this week’s bounce, XAU/USD was trading at levels not seen since early August. Despite the bullish price action in recent days, the yellow metal is down from the start of September by over 2%. While risk assets gained, safe-haven gold prices remained rather resilient on today’s news flow. That may change as Wall Street traders digest the information on the US open tomorrow.

Still, highly-indebted Evergrande isn’t out of the woods yet and faces a possible debt restructuring. However, this likely takes a worst-case scenario off the table, at least for now. The Australian Dollar gained over 0.50% before scaling back slightly. Treasury yields rose modestly. Meanwhile, the broad-based US Dollar DXY index is hanging on to gains.

Tomorrow brings another potentially high-impact event for gold prices. The Federal Reserve’s Open Market Committee (FOMC) will announce its September interest rate decision, along with updated economic projections and the “dot plot.” It is widely expected that rates will remain unchanged. Instead, language on tapering balance sheet growth will be a keen focus for market participants.

Gold prices are likely to fall if the Fed’s announcement is hawkish relative to expectations. Alternatively, a comparatively dovish stance could see prices rally further. Fed Chair Powell may push a tangible timeline on tapering back and only provide verbal guidance to markets. The dot plot – which illustrates board members’ interest rate projections – is likely to be the key focus. A shift up in the median projection (more hawkish) may pull gold prices down, as that would likely cause Treasury yields to rise.

Copper prices shot higher on the positive Evergrande news. China is the largest copper consumer in the world. Prices gained over 2% during Wednesday’s APAC session. The PBOC also moved to shore up cash through reverse repo operations, bolstering sentiment further. The avoidance of a potential housing market collapse in China was the likely underlying catalyst for today’s move.

However, the red metal remains lower on the month. China took action earlier this year to reign in steelmaking production and copper refinery activity in a move to reduce emissions and cap commodity prices. Evergrande-related risks are not off the table completely. A housing market collapse is potentially devastating for the red metal, which is heavily used in home building and other construction. Keep in mind that the Chinese real estate market has the most direct exposure to Evergrande.

XAU/USD is tracking higher for its third day, breaching above the 61.8% Fibonacci retracement from the August/September move. If bullish momentum persists, the falling 200-day Simple Moving Average (SMA) will move into focus. Alternatively, a move lower may see former channel resistance act as support again, like it did earlier this month. 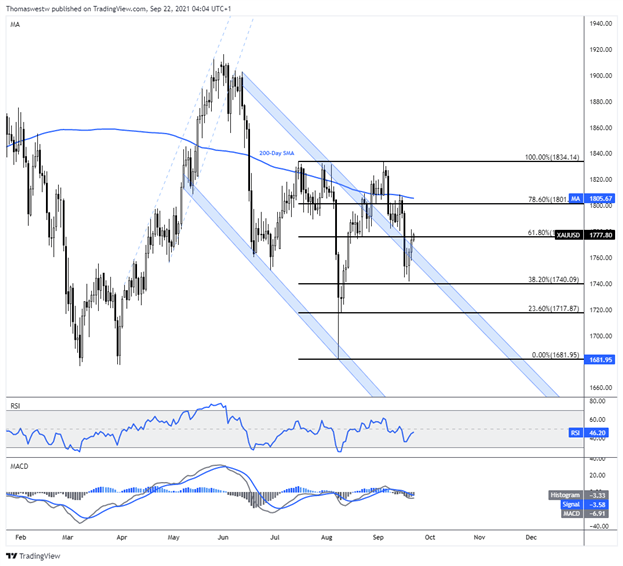 Copper is over 2% higher on Wednesday. Prices catapulted from the 23.6% Fibonacci level before slicing above the 38.2% Fib. The recently breached 200-day SMA was also recaptured. The 61.8% Fib level and the falling 100-day SMA will come into focus if prices continue rising. On the other hand, the 200-day SMA will be eyed for support if prices reverse. 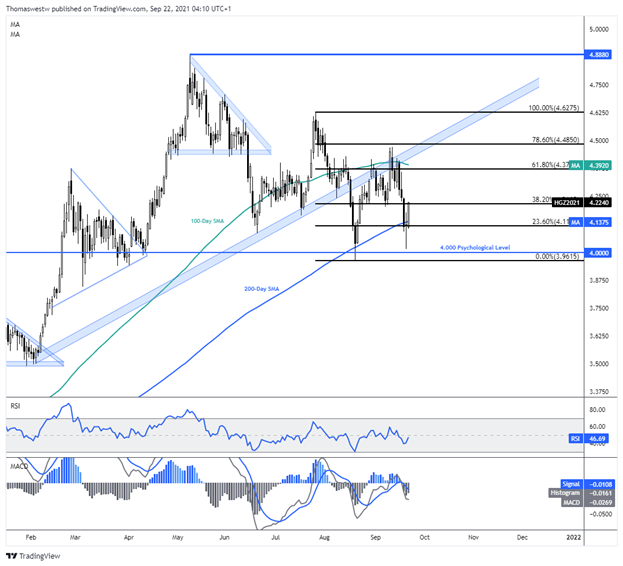