Crude oil prices briefly touched a six-week high but the rally fizzled as broader risk-off capital flows weighed on cyclical assets. The WTI contract retreated alongside US shares before veering off to recover a bit of ground into the session close, which nevertheless locked in a loss for the day.

The going interpretation making the arounds across the newswires links these moves to August’s US CPI report. It registered a larger core inflation slowdown than expected, putting the on-year rate at 4 percent versus the 4.2 percent expected by economists.

Sentiment briefly firmed as the data printed, presumably reflecting hopes for a delay in Fed stimulus withdrawal: gold rose, yields fell and the US Dollar weakened. That optimism rapidly evaporated however, with risky assets plunging as the greenback tellingly popped upward alongside Treasury bonds and the Yen.

Observers are linking this change of heart to the markets concluding that the modest undershoot is unlikely to alter the Fed’s calculus ahead of next week’s much-anticipated FOMC meeting. With little else on the docket to sway officials, preemptive hedging against hawkish surprise risk may have started.

Oil’s late-day retracement higher may have reflected earlier supportive comments from the IEA and OPEC. Both released monthly outlook reports. The Agency warned that recent production increases have been offset by damage from Hurricane Ida to US capacity. The cartel envisioned robust demand ahead.

Weekly inventory flow data is in focus ahead. The EIA is expected to report that stockpiles shed 2.7 million barrels last week. Leading API data put the drawdown at a heftier 5.4 million yesterday. Crude prices may get a lift if this proves to foreshadow a similar outcome on the official print.

Supportive cues appear on the risk appetite front too, with bellwether S&P 500 futures ticking cautiously higher ahead of the opening bell on Wall Street. European shares are in a soggy mood in morning trade however, making for a somewhat conflicted sentiment lead and warning of weak follow-through potential either way.

Crude oil has seemingly overturned the downtrend from early July with a break of falling trendline resistance but prices have struggled to find follow-through past the resistance zone capped at 70.80. A breach confirmed on a daily closing basis eyes key barriers at 72.78 and 74.23 thereafter.

In the event of a false breakout and capitulation, the key support in focus seems to be at 66.35. Securing a foothold below that would suggest the broader downtrend is back in play and set the stage to challenge support zones underpinned at 63.53 and 61.56. 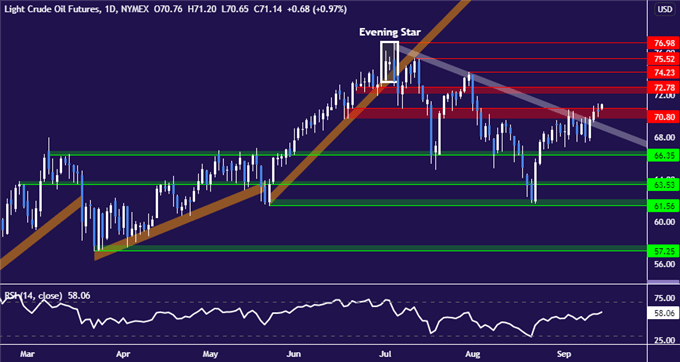