Gold prices marked time this week having roared higher in the wake of the Jackson Hole symposium. Traders seemingly read as ‘dovish’ a speech by Fed Chair Powell where he separated the start of tapering QE asset purchases from subsequent interest rate hikes, saying the latter remains distant even as the former may need to begin this year.

The lack of follow-through seems telling. Traders were notably cheered by Mr Powell’s cautious posture, implying they were anticipating a firmer commitment to policy normalization. Nevertheless, their reluctance to carry this narrative forward this week appears to speak to the fact that the central bank head still offered the most hawkish assessment of future policy since the onset of the Covid-19 outbreak.

Indeed, the markets bristled at the mere mention of considering a wind-back of QE just a few months ago. That they now saw the start of such a process within a short four months as ‘dovish’ speaks volumes about the Fed’s communication strategy, which seems to have successfully acclimated investors to the need for pulling back emergency support. This may embolden officials to escalate further, provided the economy complies.

HOW WILL US JOBS DATA SHAPE FED POLICY BETS?

That latter bit will be in focus as Augusts’ US employment report hits the wires today. It is expected to deliver a slowdown in hiring, with 750k rise in payrolls marking the smallest gain in four months. The jobless rate is expected to tick lower however while wage inflation remains at a formidable 4 percent on-year. Taken together, this hints that weakness in the headline number reflects labor shortages rather than weakening demand.

This may inspire worries about a wage-push inflationary spiral, whereby companies pass on higher labor costs to consumers by raising prices, and workers respond by demanding still-higher wages to cope. Such a dynamic might turn what the Fed still argues is a “transitory” rise in price growth into something lasting, pulling the central bank off-course as it tries to land inflation at the target 2 percent (on average).

If markets find appreciable risk in the probability of such a scenario following the jobs report, they may conclude that tapering QE may be made official as soon as this month’s FOMC meeting. Gold prices are likely to suffer against such a backdrop as the US Dollar gains alongside Treasury bond yields, undermining the appeal of the non-interest-bearing, perennially anti-fiat yellow metal.

Gold prices are idling below familiar resistance at 1834.14 having mounted a spirited recovery in August after tagging a four-month low. Negative RSI divergence warns that upside momentum is ebbing however, which may set the stage for a reversal downward. 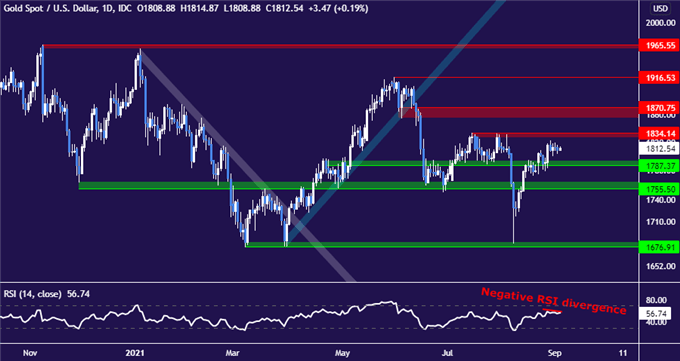