Crude oil prices are idling below the $70/bbl figure, echoing broader standstill across most benchmark assets. Markets appear to be in a holding pattern after Friday’s Fed-inspired fireworks, awaiting the next bit of substantive guidance on the direction of US monetary policy.

That is likely to come in the form of August’s US employment report. It is expected to deliver a slowdown in hiring, with a 750k rise in payrolls marking the weakest reading since May. The jobless rate is seen ticking down however while wage inflation holds up at a formidable 4 percent, matching a four-month high.

Taken together, this seems to suggest that a drop-off in hiring might reflect labor shortages rather than weakening appetite for workers. That would add to already-mounting signs of economic pain from swelling price growth and may encourage the Fed to press on with starting to taper QE asset purchases.

Indeed, the “dovish” interpretation of Fed Chair Powell’s speech at the Jackson Hole symposium may embolden policymakers to act. That he did not trigger panic by saying the taper may begin this year – a hawkish escalation in official rhetoric – signals that markets have grown acclimated to the idea of stimulus reduction.

Crude oil produced a negative (albeit short-lived) response to Wednesday’s soggy ADP hiring data. A similar result on the headline payrolls print may be compounded by pressure from a rising US Dollar if the whole of the report stokes tightening speculation.

Crude oil prices have stalled below resistance guiding the downtrend in play from early July. Support is in the 66.35-68.00 area. A reversal back below that may bring a retest of the support shelf at 61.56, with perhaps a bit of friction in the 63.53-81 zone along the way.

Confirming a bullish reversal appears to call for a daily close above the 69.77-70.80 price block. From there, the WTI contract may extend upward to challenge the 72.17-78 inflection region along the way toward the swing high at 74.23 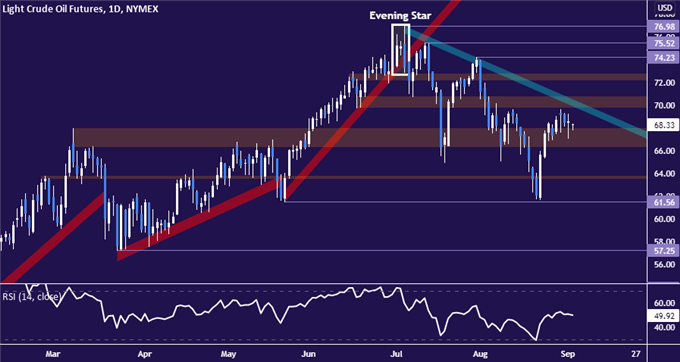