Gold Price Forecast: Will XAU/USD Shrug off a Higher US Retail Sales Outcome?

Anti-fiat gold prices aimed cautiously higher on Thursday, reversing some of the losses experienced the prior day. That is when a much higher-than-anticipated US CPI report bolstered Fed tapering expectations, driving up Treasury yields and the US Dollar. Both of the latter moving higher can be detrimental to the yellow metal, so Thursday’s price action might have been a recalibration of the outlook for monetary policy.

St. Louis Fed President James Bullard spoke over the past 24 hours, saying that it is still ‘too early’ to talk about tapering bond purchases. He reiterated the central bank’s persistent dovish tone, perhaps calming bond markets. A decline in commodity prices, from crude oil to copper, may have also further calmed market sentiment.

Over the remaining 24 hours, all eyes are on US retail sales and University of Michigan sentiment data. Better-than-expected outcomes could rekindle bond rates, placing XAU/USD at risk. Having said that, the Fed’s dovish tone could numb a market reaction to unexpected beats. Wholesale inflation crossed the wires higher-than-anticipated on Thursday, but failed to translate into a reaction similar to the CPI data.

Most Asia-Pacific stock market benchmarks traded in the green on Friday, opening the door to a rosy day for risk appetite heading into the weekend. If this sentiment holds, the US Dollar may be vulnerable, perhaps boding well for the yellow metal.

XAU/USD remains biased to the upside in the near term from a technical standpoint. Rising support from the end of March seems to be keeping the focus tilted higher. That said, there is room for gold prices to weaken before testing that trendline. Keep an eye on the 50-day Simple Moving Average (SMA). If the latter holds, XAU/USD may retest the key 1838 – 1845 resistance zone. Above that sits falling resistance from August. 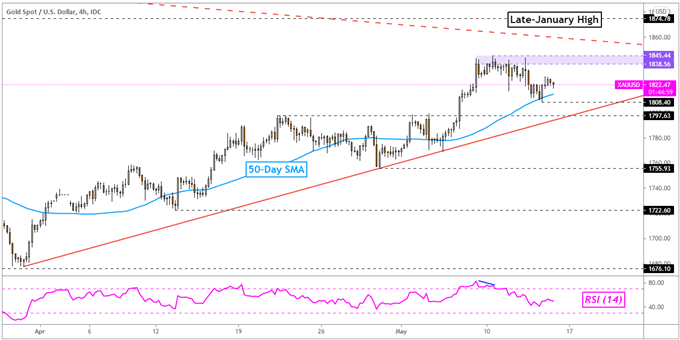