Crude oil prices declined over the past 24 hours as anti-fiat gold prices soared. Most of the focus from investors were on ongoing tallies from the US presidential election. After taking key swing states Wisconsin and Michigan, Joe Biden narrowed the gap against Donald Trump in other ones such as Georgia and Pennsylvania during Friday’s Asia Pacific trading session. Mr Trump closed in on Joe in Arizona.

On Thursday, key OPEC member Saudi Arabia announced that it is cutting oil prices for customers in Asia. Meanwhile, prospects of a Joe Biden win likely had oil traders focusing on his campaign promise to shift away from fossil fuels over time. Rising coronavirus cases in the US also likely contributed to some weakness in energy prices. The nation surpassed 120k confirmed reports, raising isolated lockdown prospects.

Heading into the end of the week, all eyes will likely remain on more vote counts from the US election. There remains the risk for markets that Trump catches up to Joe or maintains some of his leads. That would raise bets of a contested election and increasing uncertainty, reintroducing volatility. That may further dent crude oil prices.

This may also bode ill for gold prices, which rallied recently on a weaker US Dollar. Volatility may bring life back into the more-liquid greenback, sending XAU/USD lower. Another risk is a softer-than-expected US non-farm payrolls report. That would underscore the need for further fiscal aid, something that the Fed stressed when it left benchmark lending rates and the size of asset purchases unchanged on Thursday.

WTI crude oil prices turned lower after testing the 50-day and 20-day Simple Moving Averages (SMA). In September, a bearish ‘Death Cross’ formed as the 20-day crossed under the 50-day one. Now, prices are eyeing the 36.15 – 37.10 support zone. Taking it out exposes the 29.11 – 31.14 inflection range. Otherwise, a turn above the moving averages places the focus on August highs.

Recommended by Daniel Dubrovsky
What is the road ahead for crude oil this quarter?
Get My Guide 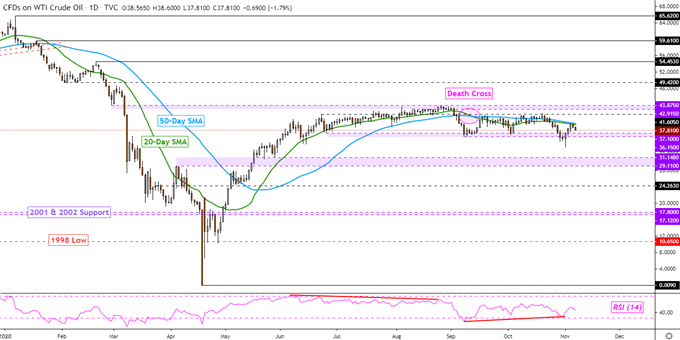 Gold prices soared past the 20-day and 50-day SMAs over the past 24 hours. This is a step towards invalidating the bearish ‘Death Cross’ from September. XAU/USD also took our falling resistance from August as well as the 1924 – 1933 inflection point. While this can be viewed as quite bullish, confirmation of these breakouts is lacking. A further upside close could open the door to extending gains towards August highs.

Recommended by Daniel Dubrovsky
What is the road ahead for gold this quarter?
Get My Guide 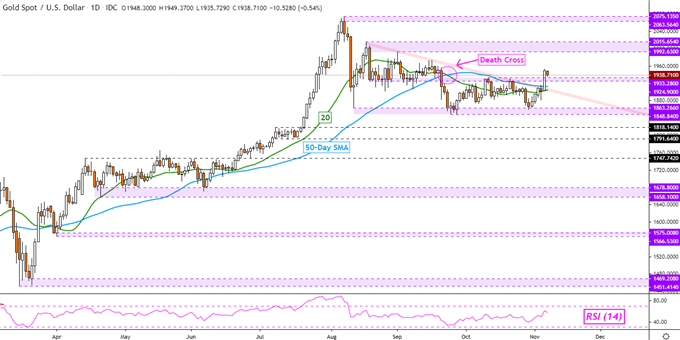