Gold prices rose as the US Dollar retreated, suffering the largest one-day drop in two months. That bolstered the appeal of the standby anti-fiat alternative. Fading US fiscal stimulus hopes might have been the catalyst at play. Congressional leaders and the White House seem too far apart to deliver near-term relief, which may have been judged as increasing the likelihood that the Fed is forced to dial up monetary support.

For its part, the US central bank has signaled its intent to adopt a hands-off approach for now. That may explain why a synchronized response across benchmark assets – a familiar feature of the current sentiment-sensitive environment – was not to be had this time around. Stocks drifted lower on Wall Street and benchmark Treasury yields marked time.

Nevertheless, it seems telling that the Greenback fell alongside breakeven rates – the priced-in measure of inflation expectations baked into bond markets – while real interest rates (i.e. nominal rates adjusted for expected inflation) turned more negative. That seems to imply worries about a sluggish growth backdrop that forces Fed Chair Powell and company back into the fray.

US PRESIDENTIAL DEBATE, JOBLESS CLAIMS ON TAP AS SENTIMENT SOURS

Looking ahead, the emergence of a broad-based risk-off across global markets may stymie gold’s advance. Bellwether S&P 500 futures are pointing convincingly lower in late Asia-Pacific trade, warning of a defensive backdrop. That may rekindle haven demand for the Dollar’s unrivaled liquidity, pulling the currency upward at gold’s expense. Another worrying US jobless claims print might reinforce this dynamic.

The second (and last) debate between US President Donald Trump and former Vice President Joe Biden ahead of next month’s presidential election is also on tap. Last time, Mr Trump’s combative approach seemed to boost his opponent’s standing in opinion polls and lifted investors’ mood. They might have reckoned that a Biden victory amounts to greater scope for an accommodative fiscal stance.

A similar result this around might cheer investors once again, pressuring USD and underpinning gold prices. The decision by the Commission on Presidential Debates (CPD) to mute the debaters’ microphones for part of the contest so each candidate has an opportunity for some uninterrupted speaking might make for a more orderly outing. Risk appetite might cool if Mr Trump manages to capitalize.

Gold prices remain pinned to resistance in the 1911.44-28.82 area, a former support zone reinforced by a falling trend line set from mid-August. A turn lower from here that takes prices below the 1848.66-63.27 support shelf may expose the way below the $1800/oz figure. Alternatively, a breach of resistance may bring on a test back above $2000/oz. 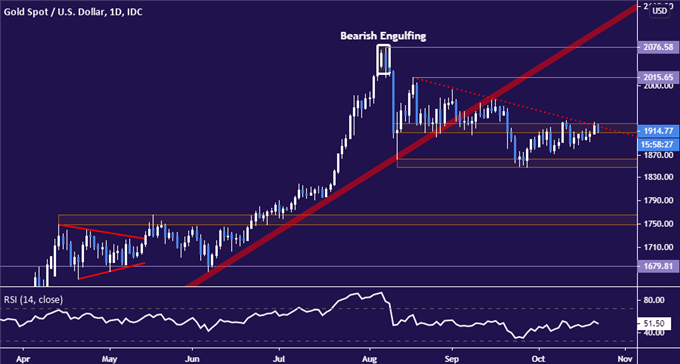 Crude oil prices recoiled from range resistance in the 42.40-43.88 area. Near-term support is in the 34.64-36.15 zone, with a daily close below that targeting the 27.40-30.73 region next. Alternatively, a rebound that establishes a foothold above resistance likely sets the stage for a challenge of the $50/bbl figure. 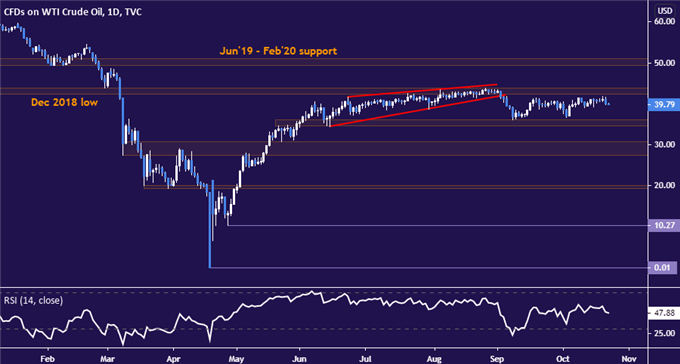