Gold prices slide alongside stocks as hopes for a boost in US fiscal stimulus before next month’s presidential election soured. House Speaker Nancy Pelosi and Treasury Secretary Steve Mnuchin reportedly made progress in negotiations but that is unlikely to inspire passage in the Republican-controlled Senate, where the majority seems to favor a $500 billion effort. The Democrat-led House as well as the Trump administration are aiming for something closer to $2 trillion.

Fading fiscal stimulus hopes are coupled with a Federal Reserve that is now seemingly content to be on the sidelines after offering markets a crucial lifeline earlier in the year, even as the recovery in economic growth appears to stall. Global PMI figures from JPMorgan and Markit Economics show manufacturing- and service-sector growth slowed for the first time in five months in September. Meanwhile, Citigroup reports that economic activity data has been weakening relative to forecasts since mid-August.

Not surprisingly, this has been damaging for market-wide risk appetite. The anti-risk US Dollar traded higher against this backdrop as capital sought out its unrivaled liquidity as a bulwark against adverse volatility. That understandably pressured gold, a standby anti-fiat alternative. That benchmark bond yields did not fall against this backdrop – as might have been expected in risk-off trade – probably compounded the non-interest-bearing yellow metal’s woes. The Fed’s hands-off stance was probably on display there.

GOLD PRICES MAY FALL AS US FISCAL STIMULUS HOPES FADE

Looking ahead, US fiscal stimulus prospects are likely to remain in focus after Ms Pelosi set a Tuesday deadline for reaching agreement on any pre-election program. S&P 500 futures are pointing cautiously higher in late Asia Pacific trade but optimism may fizzle – marking for a repeat of yesterday’s cross-market dynamics – if it becomes clear that additional support is not in the cards near-term. Third-quarter earnings reports from consumer-goods giant Procter & Gamble, aerospace heavy-weight Lockheed Martin as well as tech champions Netflix and Snap Inc are also on tap.

A tepid recovery in gold prices is struggling at resistance in the 1911.44-28.82 area, marked by former range support and a falling trend line defining the bearish bias in play since mid-August. Immediate support is in the 1848.66-63.27 zone, with a daily close below that seeming opening the way below the $1800/oz figure. Alternatively, a breach of resistance may set bring on a test back above $2000/oz. 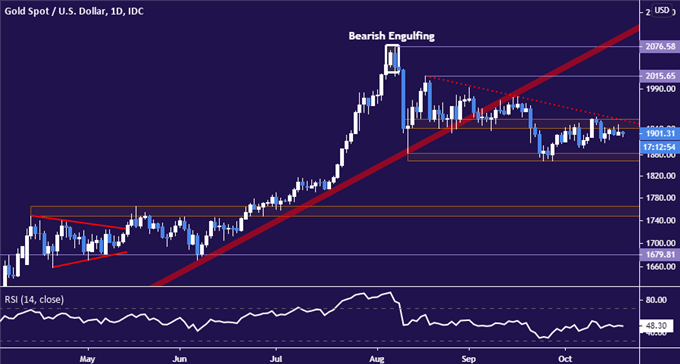 Crude oil prices continue to mark time below range resistance in the 42.40-43.88 area. Support is in the 34.64-36.15 zone. A top side break may set the stage for a challenge of the $50/bbl figure. Alternatively, establishing a foothold below support probably targets the 27.40-30.73 region next. 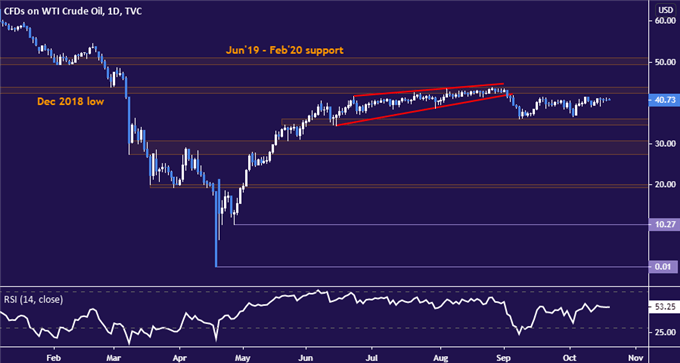