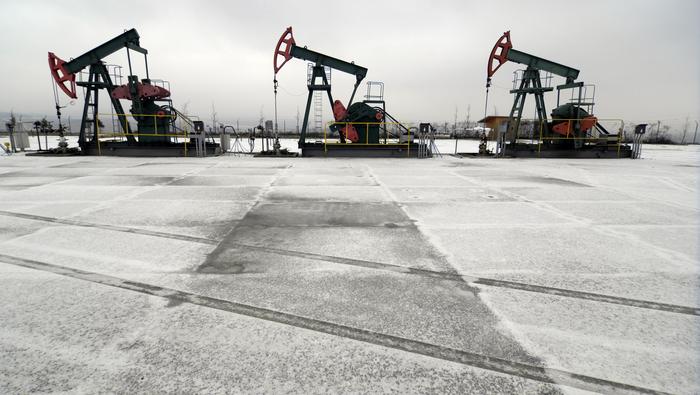 Crude oil prices abruptly fell on Friday after the Norwegian Oil and Gas Association announced the end of a strike that had derailed close to 8 percent of Norway’s output and threatened to shutter its largest oil field. Successful mediation talks ended the dispute at the heart of the disruption.

Prices are under pressure again at the start of the new trading week, gapping lower following weekend news that Libya will reopen Sharara, its largest oil field. US operations in the Gulf of Mexico also started to return online having been shut thanks to Hurricane Delta.

Gold prices tracked higher alongside stocks on Friday as risk appetite swelled across global financial markets. The chipper mood weighed on the safe-haven US Dollar, which offered a familiar lift to the perennially anti-fiat yellow metal.

Hopes for another round of US fiscal stimulus buoyed investors’ mood after US President Donald Trump reversed earlier opposition to the effort and returned to negotiations. Markets swooned after Mr Trump earlier said that he would walk away from talks until after November’s election.

Looking ahead, a quiet day on the economic data front through the Columbus Day holiday in the US might keep broader sentiment trends in the driver’s seat. Bellwether S&P 500 stock index futures are pointing cautiously higher, flagging a risk-on tilt.

Crude oil prices recoiled from range resistance in the 42.40-43.88 area. A downswing from here sees initial support in the 34.64-36.15 zone, with a daily close below that exposing the 27.40-30.73 inflection region. Alternatively, a reach of resistance may bring a retest of the $50/bbl figure. 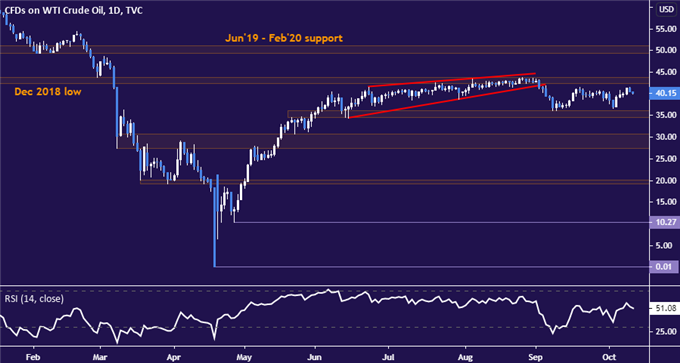 Gold prices are testing the bounds of the downtrend traced out since mid-August. A daily close above 1940.00 would amount to a breach, which may set the stage for another probe above the $2000/oz figure. Alternatively, a turn through support in the 1848.66-63.27 area may clear a path below the $1800/oz mark. 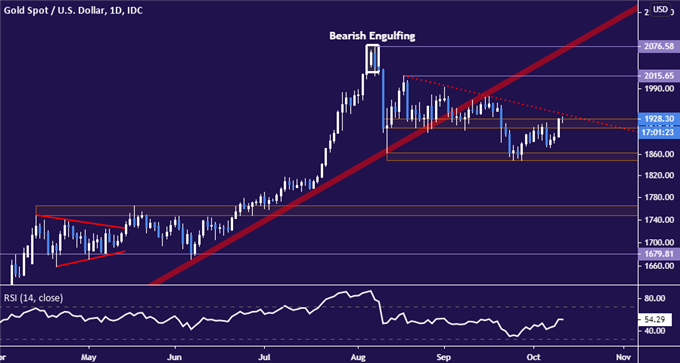