Crude oil prices are pondering their next move having established a near-term top in early September. That reversal mirrored a trend turn across benchmark assets including gold, the US Dollar and the S&P 500 stock index – a bellwether for market-wide risk appetite.

The move seems to have been driven by the Fed’s decision to forego further stimulus expansion after the herculean effort to beat back Covid-inspired turmoil. Chair Powell and company pivoted to a hands-off stance, capping the feverish response to their push of real rates into negative territory.

From here, the spotlight turns to US services ISM survey. It is expected to that growth in the largest part of the world’s biggest economy slowed for a second consecutive month. Recent data flow has softened relative to baseline forecasts, opening the door for a downside surprise.

That might pressure crude oil, which has struggled despite draining inventories thanks to a dour demand outlook. Moreover, anything shy of a dramatic disappointment may fall short of changing investors’ Fed policy calculus, adding to prices’ vulnerability to selling pressure.

Gold prices are in a similar predicament. A soft ISM result might translate into a mildly supportive pullback in bond yields. Absent an unlikely nod toward expanded Fed policy support however, the standby anti-fiat alternative may not capitalize in earnest.

Away from the economic calendar, markets continue to track jittery attempts to strike a deal on a US fiscal stimulus boost as well as the health of US President Donald Trump. He was admitted to the Walter Reed National Military Medical Center after testing positive for Covid-19 on Friday.

Crude oil prices are oscillating in a range below the $44/bbl figure. Near-term support is in the 34.64-36.15 zone, with a break below that opening the door for a test of the 27.40-30.73 inflection area. Alternatively, a daily close above resistance may set the stage for another challenge of the $50/bbl mark. 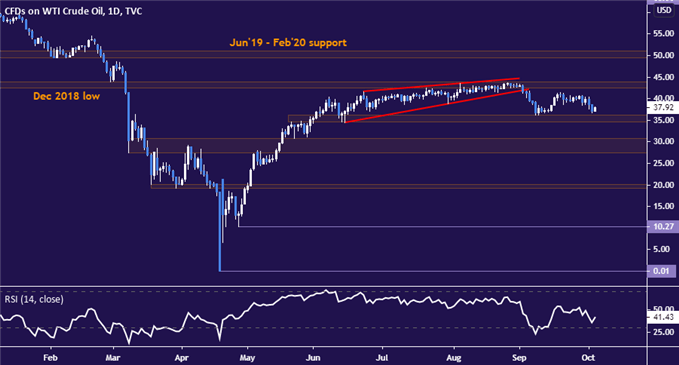 Gold prices are struggling after testing support-turned-resistance at 1911.44. Initial support is in the 1848.66-63.27 area. A daily close below that may broadly expose a path below the $1800/oz figure. A breach of falling trend line resistance set from mid-August is probably a pre-requisite for neutralizing the near-term bearish bias established on a break of rising trend support in early September. 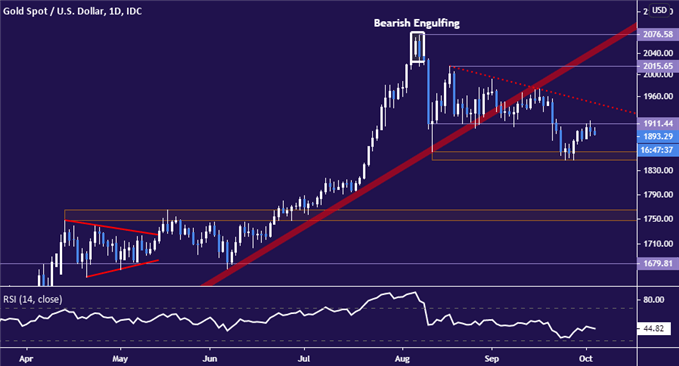