Crude oil prices continue to sink, dropping to the lowest level since mid-June. The selloff has tracked a broader downturn in risk appetite as the calendar turned from August to September, when the seasonal rebuild in participation following the “summer lull” liquidity has often marked a turn in market-wide trends.

This year, a pivot in Fed monetary policyseems to have encouraged exactly that (as expected). The central bank seemed to pivot to a ‘hands-off’ approach, adopting a looser inflation target to signal it won’t pull back existing stimulus any time soon but pouring cold water on the markets’ hopes for an expansion.

Yesterday marked a case in point. The WTI crude oil benchmark sank alongside S&P 500 futures while the US Dollar rose, seemingly inspired to recover by haven-seeking liquidity demand as well as the pricing in of a comparatively less dovish Fed policy path than investors were hoping for.

Gold prices have curiously struggled for direction against this backdrop. The Fed’s actions and their impact on the Greenback might have been expected to push down the yellow metal. Its relative resilience may reflect the recent climb in medium-term inflation expectations.

The five-year ‘breakeven’ rate – a measure of expected price growth priced into the bond market – now stands at the highest in over six months. Coupled with rock-bottom nominal yields, this amounts to negative real interest rates. Non-yielding gold shines as an alternative store of value by comparison.

Looking ahead, a relatively tame economic data docket may offer markets room for a respite after recent blood-letting. Futures tracking top US and European equity benchmarks are pointing upward, arguing for a risk-on tilt that might lift crude alongside shares. Gold may edge down as yields tick higher.

The weekly API oil inventories report is due to cross the wires. The outcome will be weighed against official EIA data set for release on the following day, where analysts expect to see that stockpiles shed 2.4 million barrels last week. Prices may rise if API flags a higher draw, or fall if it undershoots.

Crude oil prices are retesting broken support in the 37.10-38.56 area as resistance. A break upward looks likely to expose the 42.40-43.88 zone anew. Alternatively, extension downward through the 34.38-78 inflection zone may set the stage for a slide below the $30/bbl figure. 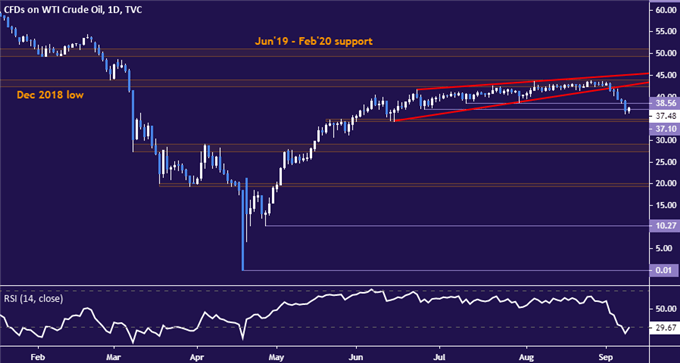 Gold prices continue to drift above the $1900/oz figure after breaking a rising trend line guiding them higher since March. A daily close below that level looks likely to expose support clustered near $1800/oz. Alternatively, a push back above the trend line eyes swing-high resistance at 2015.65 at first. 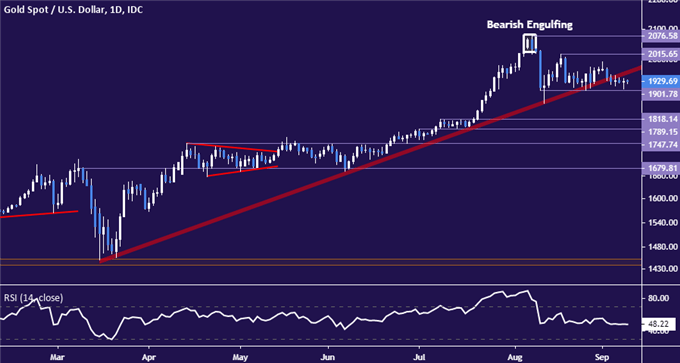