Crude Oil Prices May Struggle Despite US Output Plunge

Crude oil prices continue to struggle for direction even as risk appetite appears to be buoyant, which might have been expected to lift the sentiment-sensitive commodity. In fact – while 2020 is understandably pegged as a dismal year for global growth – an upshift in expectations amid record-setting stimulus efforts suggests 2021 will bring the fastest worldwide GDP expansion in a decade (at 5.1 percent).

Nevertheless, EIA implied crude oil demand statistics put current uptake levels – 17.4 million barrels per day (mbd) as of last week – well below the 52-week average of 18.2 mbd. That is itself low relative to recent history. That same demand trend average stood at close to 19.2 mbd before the Covid-19 outbreak, making its latest setting the lowest in over two years.

The spotlight now turns to the so-called “EIA-914” monthly US production report. It is likely to more-or-less endorse weekly data showing output has plunged to 10.8 mbd, the lowest since early 2018. While that has helped drain bloated inventories since mid-June, stockpiles remain dramatically higher than the underlying trend (508 million barrels vs. the 474 mb 52-week average).

This suggests that prices will probably have a hard time building lasting upside momentum, at least for now. Bellwether S&P 500 index futures are pointing notably higher ahead of the opening bell on Wall Street however, suggesting a risk-on backdrop that may likewise limit scope for weakness. On balance, this may translate into another day within familiar trading ranges.

Gold prices have likewise struggled for direction despite persistent US Dollar selling that would typically serve to lift the perennial anti-fiat alternative. This may reflect the latest signaling from the Federal Reserve. It seems to suggest a pivot to a somewhat passive stance after the massive stimulus surge earlier in the year. The metal may fall if Vice Chair Richard Clarida reiterates as much in comments later today.

Crude oil prices continue to struggle at the 42.40-43.88 resistance area. Price action is tracing out a Rising Wedge chart formation, which may carry bearish implications. A daily close below the pattern’s floor and through minor support in the 37.10-38.56 zone probably targets the 34.38-78 inflection region. Alternatively, establishing a foothold above resistance looks likely to expose the $50/bbl figure. 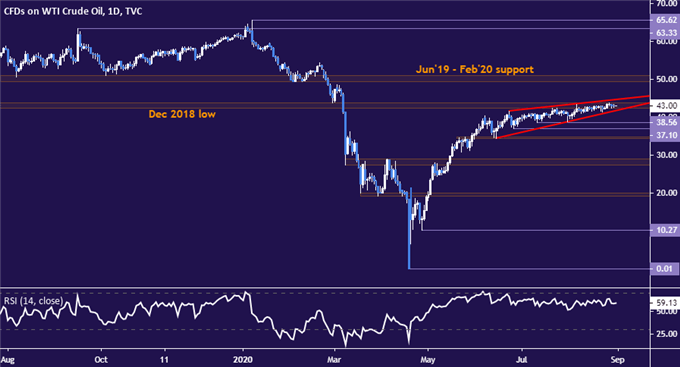 Gold prices are attempting to spring up from trend line support guiding them upward since mid-March. A breach of swing-top resistance at 2015.65 may open the door for a challenge of the of the record high at 2076.58. Alternatively, a daily close below the trend line would probably amount a meaningful bearish reversal, initially exposing support clustered near the $1800/oz figure. 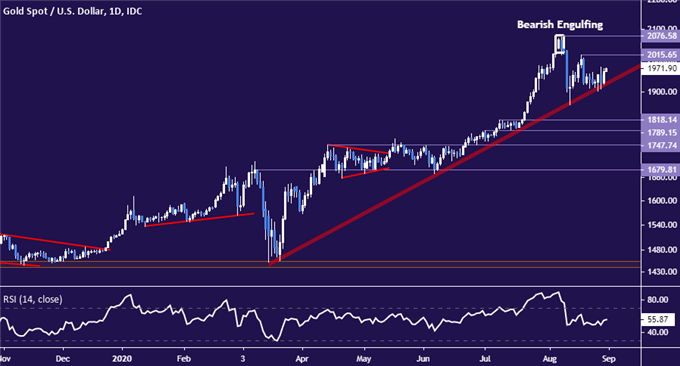