Gold prices briefly spiked upward as but ultimately finished the day in the red after Fed Chair Jerome Powell spoke at a virtual edition of the annual Jackson Hole symposium. The address was expected to update the central bank’s policy framework to signal a greater tolerance for inflation above 2 percent even as the adoption of new non-standard measures is shelved. It did just that.

The metal’s initial pop seemingly marked acknowledgement of the new setup’s broadly dovish implications, but that much looked to be thoroughly priced in before the Mr Powell spoke. That novel stimulus programs like yield curve control seem to have been set aside probably disappointed markets, too.This meant that there was little appetite for upside follow-through, as anticipated.

Crude oil prices followed a similar trading pattern to that of bullion. The WTI benchmark initially burst higher as the US Dollar weakened, offering a de-facto lift to assets denominated in terms of the go-to reserve currency on global markets. That would not prove any more lasting than gold’s brief upward foray. The two commodities fell in tandem while the Greenback trekked inversely upward.

GOLD PRICES MAY FALL AS THE YIELD CURVE STEEPENS

Looking ahead, a lull in big-splash event risk might make for a relatively quiet end to the global trading week. Bellwether S&P 500 stock index futures are cautiously pointing higher, signaling a risk-on backdrop. While this seemingly speaks to contentment with the Fed’s posture, it is not its perceived ‘dovishness’ that investors appear to be cheering: the yield curve steepened and real rates rose as Powell spoke.

This might imply that the markets saw the Fed’s measured guidance as endorsing recent improvement in the economic backdrop – however modest – and nodding to more of the same ahead. Alternatively, it may simply mark relief at the passing of event risk. Either way, the up-tilt in the term structure of interest rates bodes ill for non-interest-bearing gold and might buoy USD, pressuring crude oil prices by extension.

Gold prices continue to pressure trend line support set from March lows. Breaking below it on a daily closing basis may mark a lasting trend reversal, with a test of support near $1800/oz to follow initially. Alternatively, a push above the swing top at 2015.65 likely exposes the record high at 2076.58. 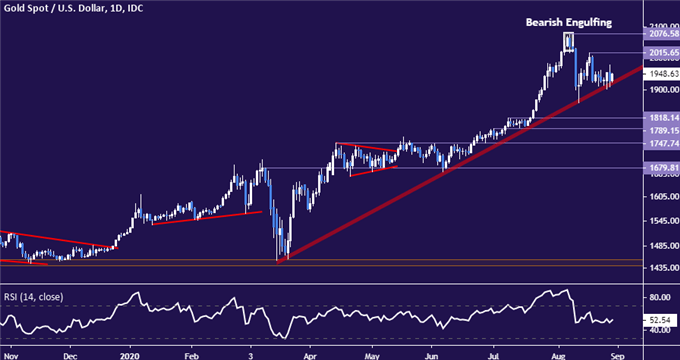 Crude oil prices are still struggling at resistance in the 42.40-43.88 area. A daily close above this barrier may set the stage to challenge the $50/bbl figure. Alternatively, a shifting back below swing-low support at 38.74 probably targets the 34.38-78 inflection zone thereafter. 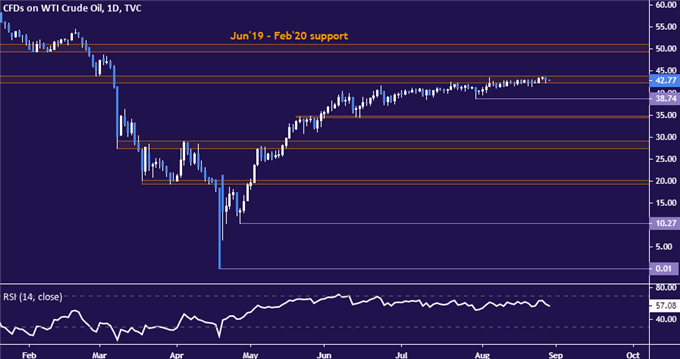