Gold prices swung lower as the US Dollar advanced at the start of the trading week. The move did not seem anchored to any particular but of news-flow. Rather, the yellow metal and its fiat arch-rival appeared to reflect pre-positioning churn as anxious markets await Thursday’s key event risk.

Fed Chair Jerome Powell is due to speak at a virtual edition of the annual Jackson Hole symposium sponsored by the central bank’s Kansas City branch. The gathering has served as a key platform for major trajectory-setting announcements in the past.

Mr Powell’s remarks seem likely to fall in line with what has been on display from bellwether officials like Vice Chair Richard Clarida, as well as July’s FOMC statement (and that meeting’s minutes): the Fed is not looking to expand its stimulus toolkit in the near term.

Instead, the Fed may adopt a long-view guidance regime whereby it signals it will tolerate relatively higher inflation for longer before pulling back support. This posture probably reflects officials’ acceptance of the limitation of monetary policy, whereby easing can support demand but not create it outright.

Crude oil prices idled in familiar territory absent a clear-cut catalyst for trend development. The spotlight now turns to weekly API inventory flow statistics. The print will be weighed up against forecasts calling for a 2.6-million-barrel drawdown to be reported in official EIA figures on Wednesday.

Gold prices are sitting atop trend line support guiding them higher since March. A daily close below it may speak to lasting trend reversal and initially expose support clustered near $1800/oz. Alternatively, a rebound above the swing high at 2015.65 may set the stage to test the record peak at 2076.58 once again. 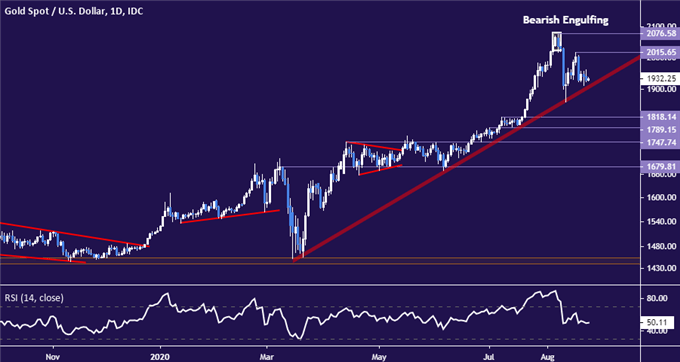 Crude oil prices are marking time at resistance in the 42.40-43.88 area. Breaking above this barrier is likely to bring on a challenge of the $50/bbl figure. Alternatively, a turn downward through the swing low at 38.74 may target the 34.38-78 inflection zone thereafter. 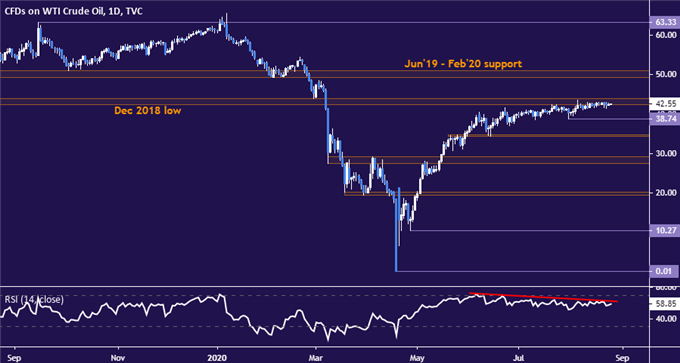