Sentiment-linked crude oil prices were little changed over the past 24 hours despite an optimistic conclusion to the Wall Street trading session. The S&P 500 closed at an all-time high. A report from the American Petroleum Institute (API) hinted that gasoline inventories climbed 5 million barrels last week. This is as anti-fiat gold prices rose, reversing more of their losses from the worst weekly performance in 5 months as expected.

Ahead, crude oil prices are awaiting an online meeting between OPEC+ ministers as participants review output and compliance goals. In fact, one of the reasons why the commodity has struggled to see meaningful upside progress as of late could be the gradual increase in OPEC output this month. All eyes are on promises from Iraq, the second-largest OPEC oil producer, to commit to deeper cuts.

Oil will also be eyeing EIA US gasoline inventories to compare to API estimates. A less-than-expected increase in supply could bolster WTI. Gold prices may find support from upcoming FOMC meeting minutes should the document reiterate the central bank’s effort to keep monetary policy ultra-lose. The rise in XAU/USD on Tuesday coincided with US longer-dated Treasury yields falling. That bolstered the relative appeal of the non-interest-bearing metal.

From a technical standpoint, WTI crude oil is idling just under the February low at 43.88. Below sits the 50-day Simple Moving Average (SMA) which could act as support in the event of a turn lower. Beyond that sits the 37.10 – 38.75 support zone. Otherwise, a push above 43.88 exposes the 49.42 inflection point which was established in late February. 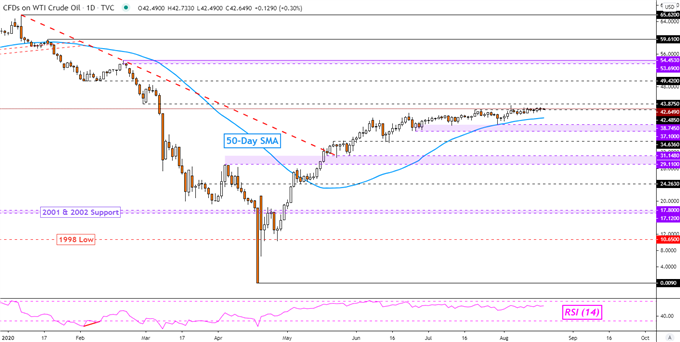 After aggressive selling pressure last week, gold prices bounced off the rising trend line from June. Now, XAU/USD has taken out the 100% Fibonacci extension at 1984, exposing the 123.60% level at 2058. Around that price is when prices topped earlier this month after a Bearish Engulfing emerged. Taking out immediate support exposes the former all-time high from 2011 on the daily chart below. 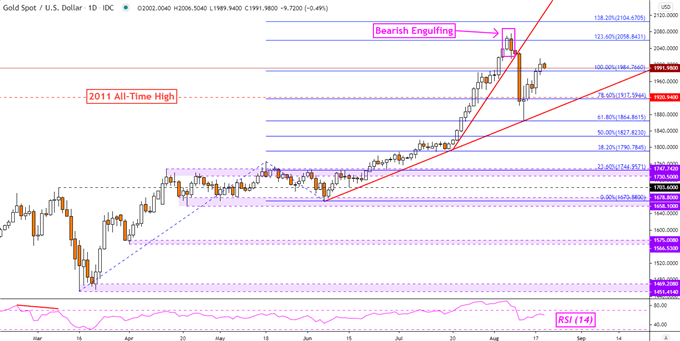