Gold prices raced upward as a sinking US Dollar sent capital fleeting to anti-fiat alternatives. The move seemed to reflect speculation that headwinds including escalating US-China tensions and a second viral wave of Covid-19 will push the Federal Reserve to expand stimulus further. The latest burst of selling pressure probably amounted to pre-positioning ahead of this week’s FOMC policy decision.

A change in in the central bank’s posture is not expected this time around. However, gold and other cash alternatives (like bitcoin) may continue higher as the Dollar suffersif Fed Chair Jerome Powell and company signal an intention to expand their toolkit. For example, the stage may be set for the adoption of a ‘yield curve control’ program in the policy statement or Mr Powell’s press conference.

Asserting a wait-and-see approach seems more likely however: the Fed has been largely successful in easing financial market conditions amid the pandemic and headline economic data – while still dismal in absolute terms – has tended to outperform expectations. Officials may thus prefer to wait before dialing up support just yet, lifting USD and forcing back downward.

Rebalancing exposure for the possibility of just such an outcome may be underway already. The Greenback has launched a spirited recovery in the second half of the Asia-Pacific trading session, after local markets had the chance to digest knock-on flows from North American trade. That might mark the unwinding of shorter-term tactical bets as event risk draws closer.

Crude oil prices managed a modest rise alongside similarly tepid gains on Wall Street. The WTI benchmark briefly dipped intraday but the spike was quickly unwound, leaving it idling in the same narrow range that has confined price action for the better part of two months. More of the same may be ahead as bellwether S&P 500 futures speaks drift, signaling a neutral setting on underlying sentiment trends.

API inventory data headlines the data docket. The outcome will be judged against expectations of a modest 1.6k rise in US stockpiles expected to be reported in official EIA statistics due Wednesday. A larger build telegraphed in this preliminary report may weigh on prices while a surprise drawdown offers a degree of support. The outcome seems unlikely to overshadow macro trends in a lasting way however. 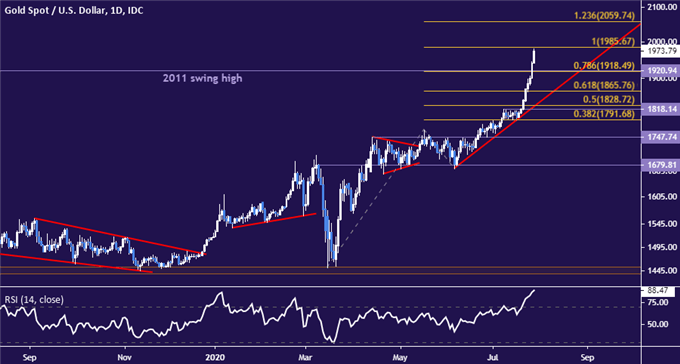 Crude oil prices are coiling up within a Rising Wedge chart formation, which typically carries bearish implications. Negative RSI divergence bolsters the case for a downside scenario. A daily close below the wedge floor confirming the setup looks likely to expose the 34.78 inflection level next. Alternatively, a breach of resistance in the 42.40-43.88 area may set the stage to challenge the $50/bbl figure. 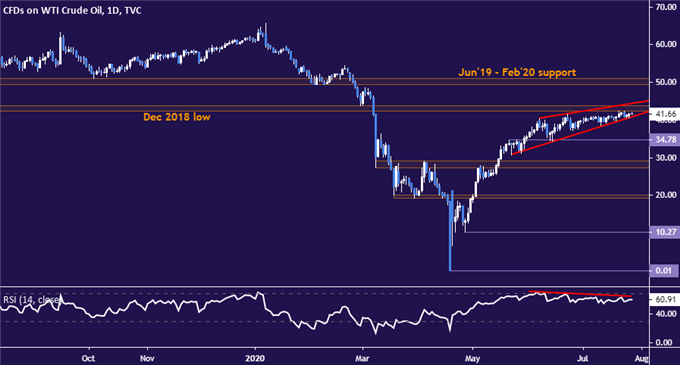