Crude oil prices echoed exuberant risk appetite across financial markets yesterday, with the WTI benchmark rising alongside stocks yesterday. Agreement on an EU coronavirus relief package after contentious negotiations seems to have sparked the move. Gold prices enjoyed roared higher as the risk-on backdrop weighed on the haven US Dollar, boosting the appeal of anti-fiat alternatives.

Interestingly, the upswell seemed to run out of steam by the time the opening bell rang on Wall Street. The bellwether S&P 500 index gapped higher but stalled in regular session trade, unable to sustain momentum. That hesitation may have reflected worries that the US Congress will be unable to approve an additional dose of fiscal stimulus before some earlier support measures run out at month-end.

That sense of apprehension carried through into Asia-Pacific trade. Regional bourses tracked lower for most of the day, shedding close to 1.4 percent on average. The risk-off swing found an accelerant on news that US authorities ordered closed China’s consulate in Houston, Texas overnight. That has weighed heavily on European shares in early trade and pushed US stock index futures into the red.

Crude oil and gold may suffer if the defensive mood carries through in the hours ahead, the former joining the spectrum of sentiment-sensitive cyclical assets on the downside while the latter is undermined as safety-seeking capital flows lift USD. Second-quarter earnings reports from CSX, Microsoft and Tesla headline the reporting schedule. EIA crude oil inventory figures takes top billing on the economic data front.

Crude oil prices rose to a five-month high to push up against resistance in the 42.40-43.88 area. Negative RSI divergence warns that upside momentum may be ebbing however, which may set the stage for a reversal. Breaking below rising trend line support set from late May on a daily closing basis appears to initially expose 34.78 as the next downside hurdle. Alternatively, a breach of resistance likely targets the $50/bbl figure. 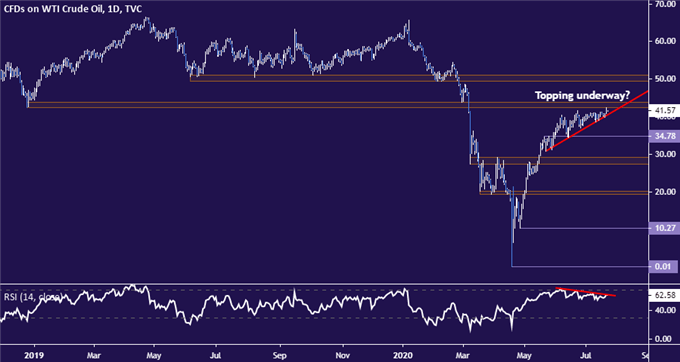 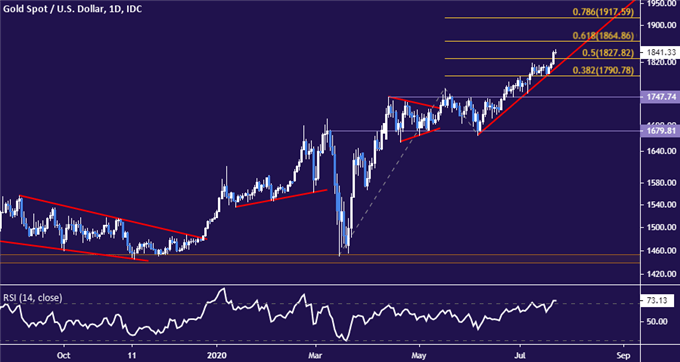